In mid-December, photographer Gavin Heffernan and his team braved freezing temps at the Eureka Dunes in Death Valley to capture the beautiful time-lapse footage seen above. They expected to (and did) get some gorgeous shots of dunes and star trails; what they didn’t expect was footage of a strange flying object (we’re purposely avoiding the term UFO because of its affiliation with oblong green men with large eyes) circling the night sky.

Armed only with boxed wine, firewood, and our DSLRs, we had to conquer epic climbs, sand roads with the 4×4 Jeep, and the occasional UFO… The “UFO” appears at (1:30-1:35) and makes three broad circular sweeps over the desert. Though in timelapse it appears to be moving fast, consider the 5 seconds = about 50 minutes, so it’s creeping. There was no sound, so it definitely wasn’t a helicopter. 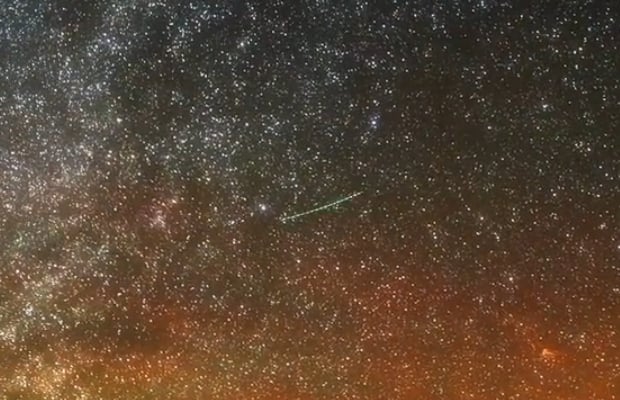 The time-lapse itself is very well put together and a joy to watch, but what’s gotten Heffernan so much attention is that strange object buzzing around for 5 seconds worth of video. We won’t venture to guess what it is, but we do want you to. So go check out the close-up on Heffernan’s flickr and if you have any theories, wild and otherwise, feel free to voice them in the comments below.