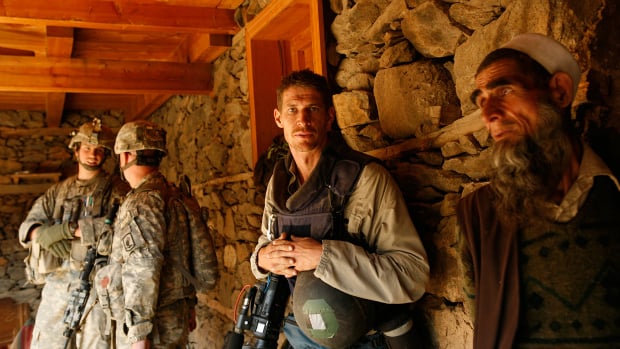 Less than two months after attending the 2011 Academy Awards with his friend and colleague Sebastian Junger, acclaimed photojournalist and filmmaker Tim Hetherington (seen above) died tragically in Misrata, Libya, only minutes away from the hospital.

Over the following year, Junger began a quest to put together Hetherington’s final hours by interviewing friends, family, and anybody who could shed light on his life and what had transpired. Being a filmmaker, it seemed only right that he record these interviews.

The result of those recordings is the HBO Documentary “Which Way is the Front Line From Here? The Life and Time of Tim Hetherington,” a look at Hetherington’s entire life and career, premiering tomorrow at the Sundance Film Festival in Utah.

The documentary will serve as Junger’s tribute to his close friend, a way for anybody who has ever seen or been touched by Hetherington’s work to remember this heroic man. But more than that, Junger’s hopes to show people the Hetherington he got to know while working together on their Oscar-nominated documentary Restrepo, a tripple-threat of brilliance, bravery and compassion:

To learn more about Hetherington or the upcoming documentary, head over to the Sundance Film Festival website or watch this short tribute video put together by the BBC:

Why We Did, In Fact, Land on the Moon: A Photography-Based Proof