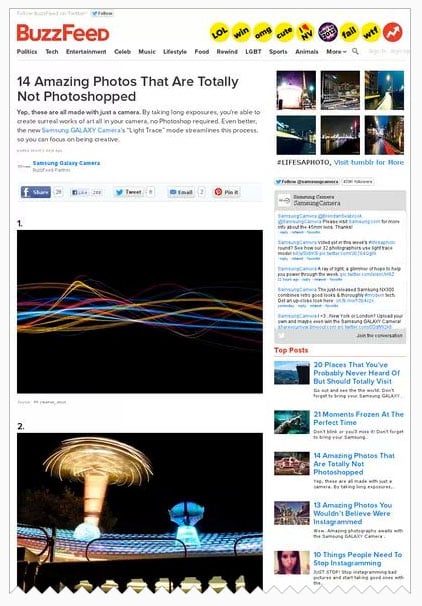 The last few days have been rough on BuzzFeed, as a Reddit outcry has gained more and more traction regarding some light painting photos the website used to create ads without seeking permission or giving credit.

The original Reddit post was put together by user Shoot_Photo when he discovered that one of his light paintings had been used in a Samsung-sponsored post promoting the Galaxy Camera’s “Light Trace” mode. The post, originally titled “14 Amazing Photos That Are Totally Not Photoshopped,” has since been taken down, but not before BuzzFeed received a serious amount of bad publicity surrounding the matter.

Reddit user TheKoG, who ended up with the top comment on the post, ran into a similar problem with BuzzFeed a few months earlier. After seeing his photos used in a Geico-sponsored BuzzFeed post, he sent a DMCA request and was contacted by the website’s CFO:

At first he told me that they try their best to find image sources, but that it can be difficult and he assumed since the photo’s been all over the internet that it was in the public domain. Once I sent him a copy of my Certificate of Registration from the US Copyright Office he became very apologetic, accepted the fact that BuzzFeed would need to pay me for their use of my photo, and quickly paid the invoice I sent them.

We’ve said it before and we’ll say it again: get your photos registered with the US Copyright Office.

The website has since backpedaled, giving every manner of apology and explaining that they do try their best to find the proper source. BuzzFeed co-founder Jonah Peretti explained that “sometimes we have trouble finding the person,” and did his best to emphasize that Samsung had nothing to do with selecting the photos, they simply sponsored the post.

Whether or not it would actually take more than 30 minutes or so to find the source of all the photos used is still under debate. But let this be a lesson learned: it may be easier to steal someone’s work in the digital age, but given enough interest and a powerful social tool (ala Reddit) the repercussions hit hard and fast.