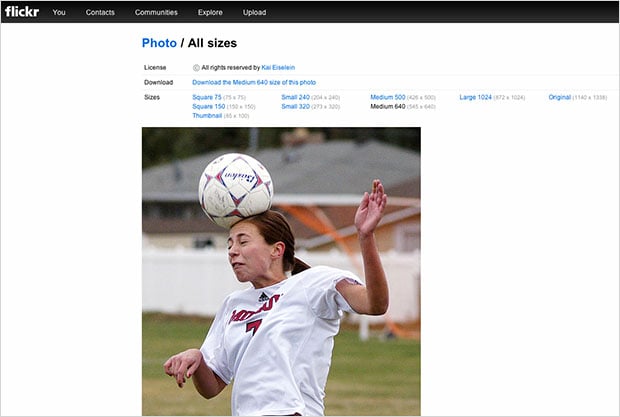 A photographer is suing the popular viral content aggregation website BuzzFeed for a whopping $3.9 million after he discovered that BuzzFeed had used one of his Flickr photos without permission in a comedy “roundup” article.

The controversy started when Idaho photographer Kai Eiselein came across an article on BuzzFeed titled “The 30 Funniest Header Faces.” It was a collection of 30 photographs showing soccer players photographed with contorted faces as soccer balls collided with their noggins,

One of the photographs in the original article was an image that Eiselein had uploaded to his Flickr account. The image was marked as “All Rights Reserved.”

As you can see from the screenshot above, the title has since been changed to “The 29 Funniest Header Faces” after Eiselein’s photograph was removed (the photographer sent BuzzFeed a DMCA takedown notice).

Shortly after the original post was published, the photograph began to appear on websites across the web (many of which source, steal, or syndicate BuzzFeed’s content):

Unhappy about the fact that his photo was published without his permission, Eiselein filed a massive $3.6 million lawsuit against the publisher in New York earlier this month. Why the massive amount for a single photo? Eiselein argues that BuzzFeed is responsible not only for its own copyright infringement, but for the damages that resulted from the photo subsequently appearing on dozens of other websites:

Buzzfeed, Inc. actively encourages its users to share content, regardless of whether or not that content is owned by, or licensed to, Buzzfeed. The plaintiff asserts that Buzzfeed, Inc. is responsible for 61 contributory infringements upon his photograph.

Here’s a copy of the lawsuit:

This lawsuit is a major challenge to a business model that many websites are adopting these days: one that is based on finding photographs online, publishing them on a website (both with and without credit) next to advertising, and profiting from the resulting pageviews.

[BuzzFeed] pays to license images from companies like Reuters and Getty, but that it also pulls from amateur sites like Tumblr and Flickr. In these cases, the provenance of the images can be unclear — in some cases, the photographer has made them available for public use while other times the author is simply unknown.

Peretti also claims that, in any event, BuzzFeed’s photo montages are fair use under copyright law because they are “transformative” (which is one factor in the first part of a complicated four-part fair use test).

This isn’t the first time BuzzFeed has been on the receiving end of a massive copyright infringement lawsuit. Last October, the website was sued for $1.3 million for publishing 9 celebrity photos without permission.

As with that case, this new lawsuit will be a big test for whether or not new media websites can grab photographs from across the Web and use them for profit without the photographers’ permission.

(via paidContent via Imaging Resource)