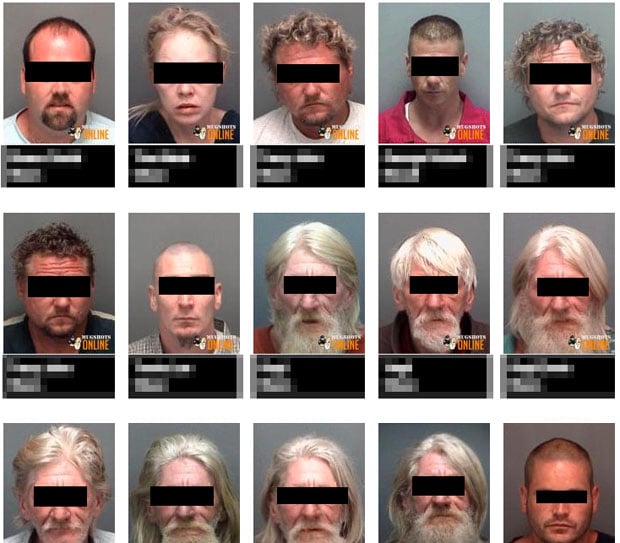 Several mugshot websites — including Just Mugshots, Busted! Mugshots, Mugshots Online, and MugRemove — are ringing in the new year with a massive class action law suit. According to NPR, hundreds of people who have been exonerated of all charges and had their records sealed are suing the websites for not only keeping their mugshots up and using them in banner ads, but refusing to take them down and “scrub” them off the Internet unless the victims pay a hefty fee.

The suit was started by Ohio woman Debbie Jo Lashaway and her lawyer Scott Ciolek, who claim that these websites are not news outlets and therefore not exempt to the publicity laws they are violating by making money off of these pictures.

Publishing the mugshots is usually no big deal, since most of them are in the public domain. When the websites begin charging people hefty sums to have them taken down, that’s when things get hairy… or at least potentially unlawful.

According to Ciolek in his Interview with Guy Raz of All Things Considered:

The lawsuit that we filed in Ohio challenges these websites on the grounds of publicity rights, and that’s like a copyright or patent that an individual has in their own persona… There are hundreds of stories we’re received since we filed the lawsuit two weeks ago, about people who’ve been totally exonerated of all crimes, and their mug shots are as present to this day on these websites as people that are guilty of very serious crimes

As you can imagine, the hundreds of people Ciolek is referencing have faced many hardships as a result of these websites. Finding work or even getting an apartment isn’t easy when your mugshot is showing up on even a quick Google search.

(via NPR via Boing Boing)

Creative: Fireworks Look So Much Cooler in Reverse