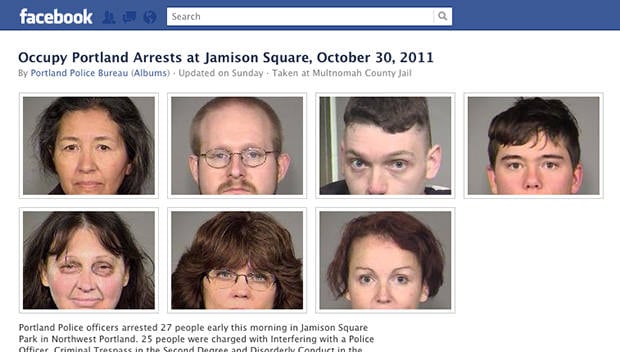 There was a minor hoopla yesterday after Boing Boing shared that mugshot photos of arrested Occupy Portland protesters were being uploaded by the Portland Police Department to Facebook.


The police department quickly explained that it’s their standard practice to publish mugshots that are of media interest. However, many people are still uncomfortable with the idea of Facebook being used as a way to share mugshots. Stan Horaczek at PopPhoto writes,

While it doesn’t seem that there’s anything legally wrong with the photos ending up where they are, it is a little…creepy. Facial recognition software is getting scary accurate and with something as simple and straight forward as a mugshot, any program looking for a person on the web would almost certainly be able to find them without any trouble.

Regarding the copyright status of mugshots: did you know that federal mugshots are automatically entered into the public domain in the US?