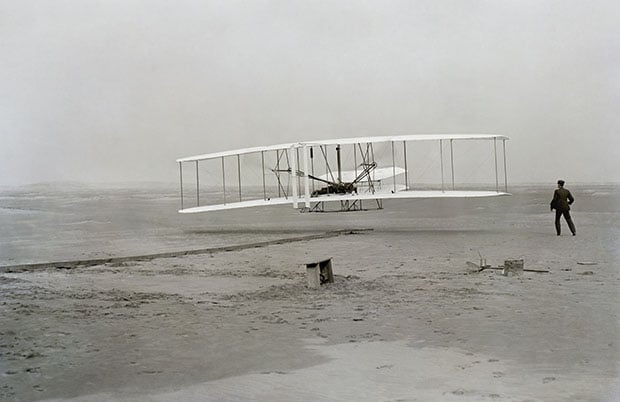 “Amateur photographer” is used quite loosely when discussing Daniels’ role in creating this particular photograph — it was actually the very first photograph Daniels’ had ever taken!

When the Wright brothers traveled to the small town of Kill Devil Hills, North Carolina to test their glider, Daniels was one of three men from the Life-Saving Station (think “coast guard”) in that town to help out with the test.

The camera, a Gundlach Korona 5×7-inch glass plate view camera, was actually owned by the Wright brothers. Prior to launching the Flyer, Orville Wright set up his tripod, focused the camera to the correct distance, and prepared the film holder. He then gave Daniels instructions on how to trigger the camera’s shutter by squeezing the shutter release bulb.

The Wright brothers flipped a coin to see who would pilot the first flight. Wilbur won but botched his attempt, so Orville’s the pilot in the iconic photograph, while his brother is seen running at the wingtip.

Daniels had never used (or even seen) a camera prior to capturing the historic shot. When the Flyer went airborne just minutes after he was taught how to operate it, Daniels was so excited that he almost forgot to squeeze the bulb. Luckily for the Wright brothers (and for all of us), he didn’t forget.

This all happened way before the days of digital photography, so neither the Wright brothers nor Daniels had any idea how the photos turned out (a total of three plates were exposed that day) on the day of the flight, and it would be some time until they would find out. Weeks passed before the Wright brothers returned to their home in Dayton, Ohio and developed the plates in their darkroom.

We’re guessing the brothers were very pleased with the job Daniels had done.

P.S. If you’d like some further reading, Ohio public radio station WYSO has published a great article and audio commentary that provides a closer look at the camera used for this photograph. Vintage Aircraft also has a much closer examination of the photograph itself.