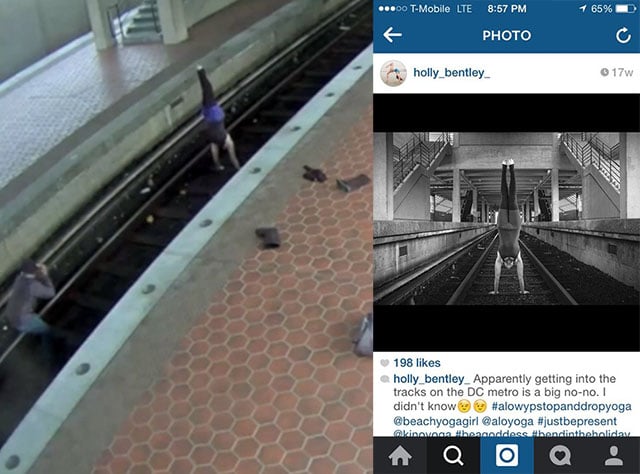 A Virginia woman has been arrested for an extremely dangerous and illegal photo shoot she did late last year. She was caught by a surveillance camera climbing down onto the tracks at a metro station near Washington, D.C. and doing yoga poses while a photographer shot portraits.

NBC4 Washington reports that Metro Transit Police were able to track down the woman this week and charge her with trespassing the stunt she did at 11am back on December 21st, 2014.

In the surveillance footage, the woman can be seen nearly falling over twice, just feet from the third rail of the track, which has 750 volt electricity running through it.

After shooting photos, the duo is seen climbing back onto the station platform, where they board a train after being confronted by a Metro employee.

A screenshot from a deleted Instagram account appears to show one of the photos that resulted from the shoot. “Apparently getting into the tracks on the DC metro is a big no-no,” writes @holly_bentley_. “I didn’t know.” 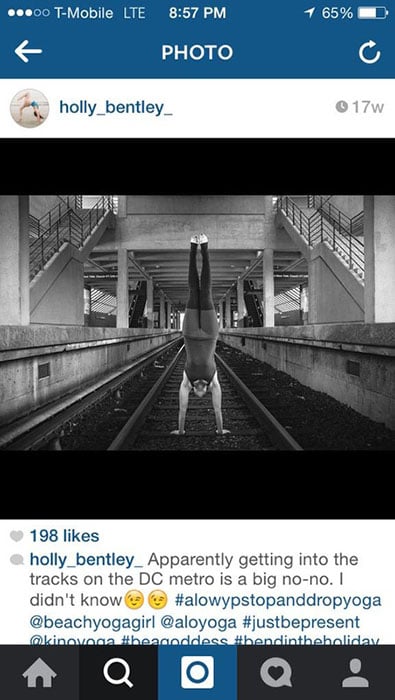 The woman’s court date is scheduled for later this month. There is no word on how authorities managed to track down the woman, and strangely, it appears the photographer has not been arrested or charged with a crime.

(via NBC4 Washington via Fstoppers)