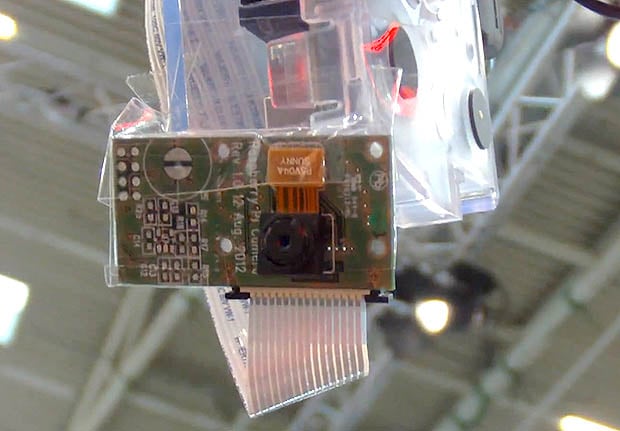 Want to build and program your own camera? You’ll soon be able to do so using Raspberry Pi’s new camera module. The new board will feature a 5-megapixel sensor (likely a cheaper CMOS chip) that can capture 1080p H.264 video at 30 frames per second.

This board will plug into the currently unused CSI pins on the Pi, using I²C for control. We’re also working on a display board, which will come to market after the camera board.

This camera board is a prototype of the production model; we’ve a (very) little way to go before we’re able to send it out to manufacture. We’ve got some testing chamber time booked in December; we need to be sure that that big ribbon cable doesn’t emit any forbidden electromagnetic radiation.

Here’s a brief video that shows a prototype of the camera capturing live footage:

The foundation is planning to start selling the camera module sometime in early 2013. The price? A mere $25. Perhaps the concept of “build your own digital camera” will become an emerging trend over the next few years as components become modularized, cheaper, and more accessible to tech-savvy hackers.

(via Raspberry Pi via Engadget)

Starry Planet: Time-Lapse of the Night Sky Captured with an 8mm Fisheye Lens