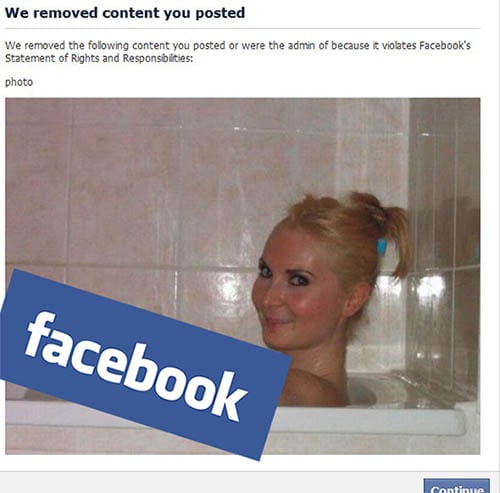 Are photo-sharing website content policies based on indecency or the mere appearance of indecency? That’s what visual web magazine Theories of the deep understanding of things decided to test out yesterday. It uploaded an innocent — but seemingly risqué — photo of a woman sitting in a bathtub with her elbow resting on the edge (warning: it looks inappropriate). Lo and behold, the social network quickly took the photo down for violating the service’s terms.

So, here’s last night’s FB alertness test results: FB moderators can’t tell an elbow from a dangerous, filthy, uncanny and violent female breast. No questions were asked and the post is down. Imagine our surprise.

So for Facebook, the policy is based on subjective appearance rather than objective content, and the service won’t hesitate to [see below] remove photographs that appear to violate its TOS. It’d be interesting to see similar tests conducted on other photo sharing services, just to see how they respond to the appearance of impropriety.

P.S. This story reminds us of this similar and humorous test that was done in real life rather than online:

Update: After this case was brought to Facebook’s attention, the company restored the photo and apologized to the owner.