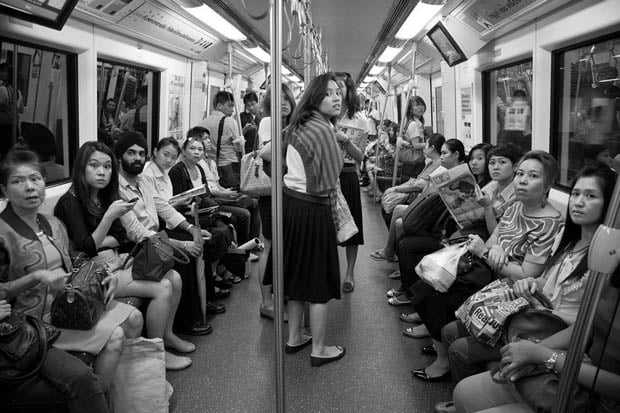 Thai photographer Benz Thanachart caused quite a stir in his country this past summer with an unusual photo project titled Smartphone. For each photo, he boarded a subway train, screamed a completely random word, and snapped a photograph to document the passengers’ startled reactions. The photograph above was captured after Thanachart shouted “Fried egg!”

Here’s Thanachart’s description of the project:

After staying in New York City for one year, I went back to Thailand on summer 2012. The biggest thing I first noticed was that several people now own smartphone. On the public transportation, they were always obsessed with the little personal space on their hand. Everybody was facing down and being cut off from the outside world. At that time although I was being in my hometown, the feeling of unfamiliarity gradually emerged. So I decided to do something to express that disoriented emotion. I got into the subway, shouted out a random word that is completely unrelated to the situation and then captured that moment. It was the moment when everyone was getting out of their small worlds and noticing the presence of public space.

Thanachart tells us that he wanted to capture photos that you don’t come across every day. Since he and the friend that accompanied him didn’t want to get into trouble with authorities, they chose random words and phrases rather than impolite or unsafe ones (e.g. “bomb”, “fire”, “gun”).

Passengers were often so occupied with their phones that the Thanachart had trouble getting everyone in the frame to look over at the same time (despite shouting at the top of his voice).

After each scream he thanked the passengers for their participation. Surprisingly, none of his “subjects” ever got mad at his sudden outbursts, and some even started laughing and asked him to do it again.

The project took a total of two days. He would shout once on each train and then step off at the next stop. After hundreds of photographs, Thanachart ended up with a handful that he liked. Once the photographs made their way online, it wasn’t long until they started going viral among the Thai people. The images attracted tens of thousands of likes on Facebook and were featured in a magazine.

Here are the photographs in the project, along with the words and phrases he shouted to elicit each reaction:

Thanks for sending in the tip, Pocky!

Image credits: Photographs by Benz Thanachart and used with permission

Canon Shows Off New Lens Cap Design: You ‘Pinch’ Rather Than ‘Squeeze’