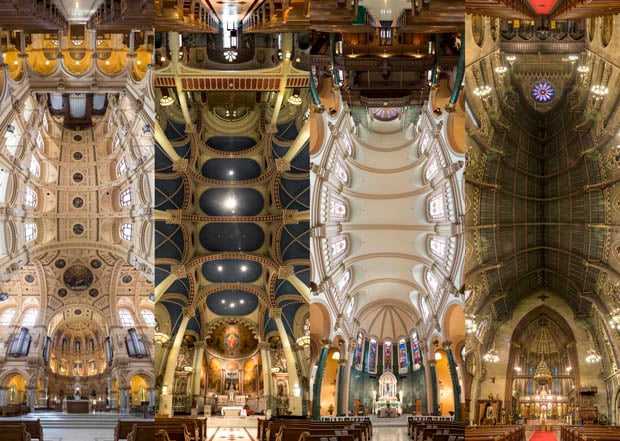 New York City is undoubtedly one of the most photographed cities on Earth, but photographer Richard Silver doesn’t let that fact faze him. He’s on a personal mission to capture facets of The Big Apple in ways people have never seen before. A month ago, we shared his New York Sliced series, which consists of spliced photos of buildings that show day turning into night.

Silver has now followed that project up with a new one titled, NY Churches, which documents the various churches in NYC through beautiful (and disorienting) vertical panoramas.

As a photographer who has traveled all over the world, sometimes I forget how much New York City has to offer. I am always trying to find new and different ways to photograph this city. This is my newest rendition of New York in Photographs.

These are done using the Panorama mode in Photoshop. Each photo is about 6-10 photos stitched together to make the panorama. I shot from the pews to the exit door and then back again to make sure that I got the shots I wanted. I used a tripod in most of the shots but (too) many of the churches do not allow tripod usage.

I wish I had figured this format out years ago because I have probably been in hundreds of churches, temples and mosques over the years through my travels… but better late than never.

Here’s a protip: if you scroll down through these images at a quick pace, you’ll feel like you’re doing front-flips through churches.

You Are Not the Only Photographer at a Wedding Anymore

Weekend Project: Use the Harris Shutter Effect for Colorful Photos