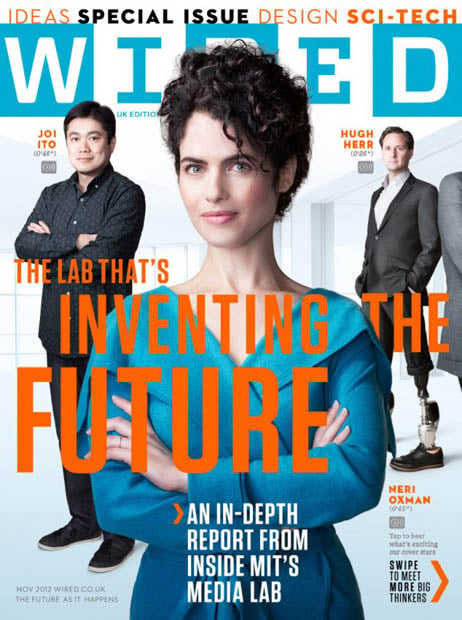 Earlier this year we received a call from across the Atlantic Ocean. The editors at Wired UK magazine had an incredibly ambitious project ahead of them that they asked us to be a part of: one week, four photographers, over thirty photo-shoots, and a triple gate-fold cover featuring sixteen of the brightest and most inspiring minds in the world at the MIT Media Lab. How could we say no?

This project for the November issue of Wired UK was one of the most interesting editorial assignments we’ve ever been a part of, and today we’re going behind the scenes to show you how we photographed the massive three-page cover. As far as the shooting was concerned, photographer Chris Crisman and I wanted to create a light that had some shape and depth, yet could be broad enough to apply to sixteen people of all different shapes and sizes and still be flattering. Since we were shooting all of our subjects over an entire week, consistency was key as well — once we had our lights set, we only made minor tweaks for each individual subject. In keeping consistency with our lighting, it was down to the talented minds at the MIT Media Lab to really let their personalities come through for the cover. 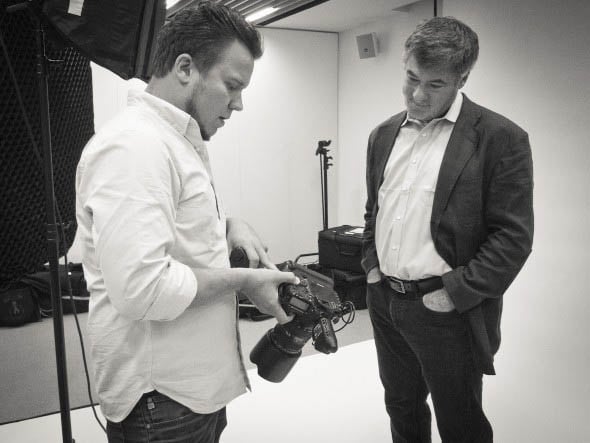 Every subject that we photographed for the cover inspired us with their depth and breadth of knowledge, but also impressed us at how they completely defied the stereotypical image of a ‘scientist.’ When you think of a scientist, typically you would imagine someone dressed up in a lab-coat, maybe a pair of thick gloves or goggles. Everyone we met and photographed at the Media Lab couldn’t have been further from that stereotype.

In particular, one of the stars of our cover, Neri Oxman (above), is a professor, the founder of the MaterialEcology design lab at MIT, and an artist with work in the MoMA. Not your typical scientist indeed.

We don’t always share lighting diagrams, but for a feature like this, we thought it would help illustrate just how we achieved the interesting and shaping light: First and foremost, a big thanks to Lighttools for enlightening us (no pun intended) about the existence of not only a 7′ Octabank, but the fact that a 30° grid exists for such a thing. This extra-large octabank was an integral part of our light, along with an extra-small gridded octabank that is even further cut by the addition of two black flags. This combination of gridded light — from a very large source (at a lower power and greater distance) — mixed with a very small source — reduced even further in size by the addition of the flags — creates a unique key light that is focused on the face of our subjects yet still creates shaping and interesting light on their entire body. 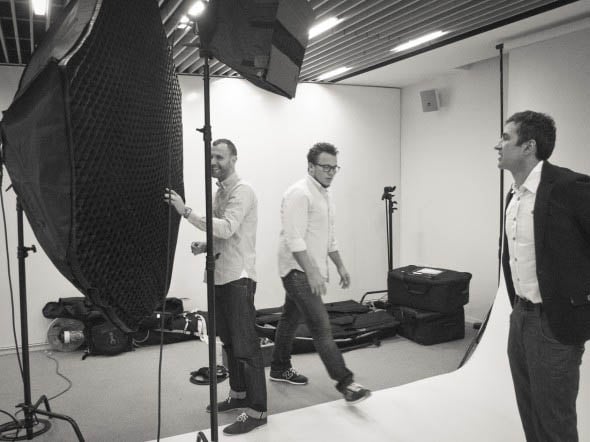 Not to mention having a gigantic gridded light on set can spark some curiosity from our subjects and art directors alike.

Once all the photos were shot and selects were made, the fun really began. We worked extremely closely with our editors and art director at Wired to make the perfect balance of all the subjects for the cover.

As far as putting it all together is concerned, I wanted to defer to the expert here: our digital artist, Taisya Kuzmenko. She says,

At first, the cover was supposed to have only three people, we got it done and it looked pretty amazing. Then we received a surprise from the UK: we were tasked to create a triple gatefold cover and add a ton of extra people. It was exciting, but just a tiny bit daunting at the same time.

So the first step of the process was to create a background plate; a clean and interesting environment to place all the subjects into. Using different parts and pieces of one of Chris’s photos from MIT, I created this space.

The next step was to prepare all people for placement on the background, which included many hours of pathing and masking, cleaning, and basic tone adjustments. When this was done and everyone took their place on the new canvas, it was time for the the heavy-duty adjustments to take place.

The biggest challenge of this project is the ability to create an illusion of 16 people (shot on seamless) standing in an environment that didn’t naturally exist. The light, tones, shadows have to match and look natural. Every little detail matters and very often I found myself working in 300% zoom.

This blending of the subjects into the space is a tricky process — meticulous, but very fun in a strange way. I think the end result speaks for itself. Working with our editors at Wired, we gave birth to a super sleek triple gatefold cover for one of the coolest magazines.