Elijah Solomon Hurwitz is an NYC-based photographer keen on documentary and street photography, and social and cultural issues. He has photographed in over 40 countries. Visit his website here. He also publishes a running log of photos (on Instagram as @elijahsol) and thoughts. 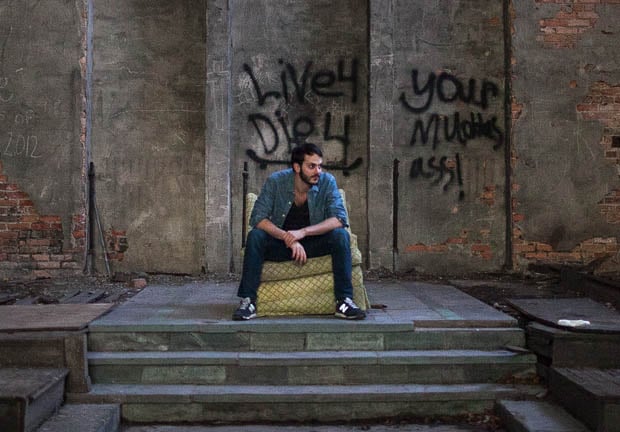 Elijah Hurwitz: Until this last year I wouldn’t characterize my story as particularly unique. I grew up in a ‘planned community’ suburb of DC/Baltimore finding ways to get into/avoid trouble and playing video games. Studied business at a midwestern state college, and then spent the next ten years in marketing roles for technology and entertainment brands in Seattle and NYC. I’ve always been really into music, traveling and the outdoors. I better put the brakes on, this sounds like an online dating profile. 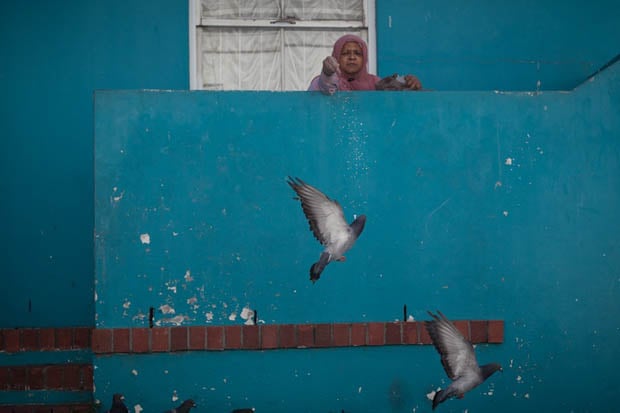 PP: How did you first become interested in photography?

EH: I started shooting about two years ago, and at the simplest level, I just liked the whole process… exploring places I probably didn’t belong with a camera as my vehicle for getting a glimpse into other lives. Constantly sizing up my surroundings. Shooting. Post-processing. Editing. Actually, scratch that last one, f**k editing. I still have no idea how to be objective with my own material. Maybe art school would have helped. But I doubt it.

I’d always been drawn to music, literature, long form journalism, visual design, etc without ever having a real creative outlet for myself in any of these areas. I’ve tried to write songs before — they sucked. To be honest, on a pragmatic level, photography was one pursuit where I felt I had a decent shot at being decent. I’m pretty good with people, curious about my environment, and willing to go just about anywhere. 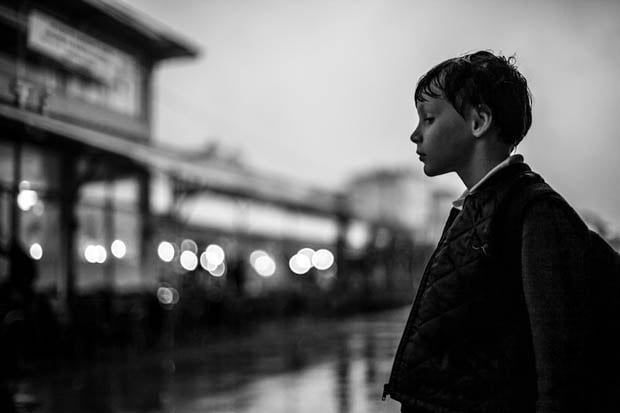 PP: Tell us about the big decision you made.

EH: Earlier this year, I decided to quit my job after ten years in the corporate world to travel and take pictures full time. My goal was to establish a documentary/photojournalism angled portfolio and to shake my life’s etch-a-sketch up a bit. 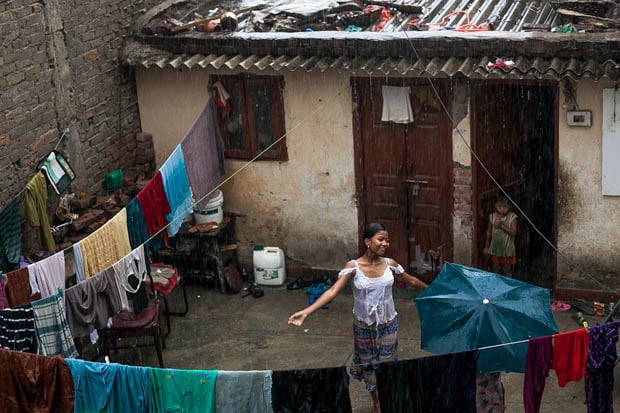 PP: What made you suddenly decide to quit your job and sell everything in order to travel the world and photograph?

EH: I’m still asking myself that. But so far no regrets. I’m 33, so it’s time to set aside childish things. I’ve always been a pretty serious traveler who talked about doing a big trip to the point of annoying my friends, and documentary-style photography added a dimension to traveling that helped me rediscover why I love travel.

If this is a quarter-life crisis, I should have started having them sooner. In fairness, I consider my situation a privilege in the first place. That I’m healthy. That I’d saved enough from ten years of corporate gigs to afford budget travel for a year — which, even with couchsurfing, AirBnB, WWOOFing — still ain’t a bargain. That I can find a job in my previous line of work after all this and won’t need to ever live at home with my folks. And living on the road isn’t so isolating nowadays. Wi-fi is everywhere. I watched March Madness in Namibia, and even in Kashmir I never missed an episode of Breaking Bad or Homeland.

One thing that’s been helpful is that I don’t need to win at this. The pressure is self-imposed. I don’t expect to support myself from photography — which seems like a more elusive possibility every day — and the areas I’m most interested in (documentary/social/humanitarian) will never be lucrative. My goal is to work on some longer-form narrative stories and get those published in outlets I respect. That’s why I’m driving around the US and Canada for 2-3 months right now while sleeping out of a car and camping.

Financially, this decision has obviously been a roundhouse kick to my savings, but I view it as an investment in long term happiness. I don’t have to grapple with the question of “what if” any longer. I’ve put up the first volley, and even when I inevitably return to desk jobs, I’ll keep doing photography on the side. I have years of grinding ahead of me to get where I want to be. I look at the work of Matt Eich, Peter Van Agtmael, Zoriah Miller, Nichole Sobecki, Aaron Huey, Ed Ou… and have light years to go. 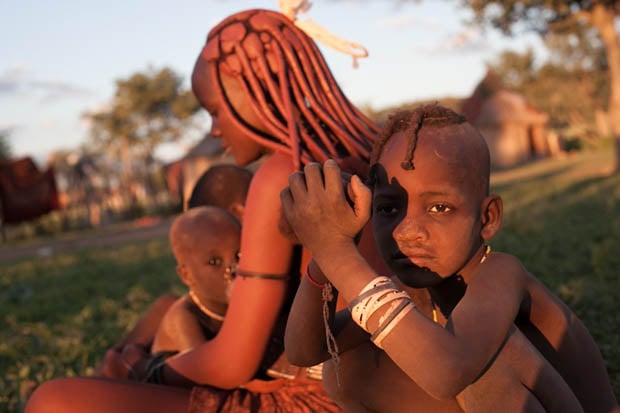 PP: Which countries have you been to so far in your travels?

EH: Lifetime, over 40. On this recent jaunt of seven months, 13. Chronologically: Chile, Argentina, South Africa, Botswana, Zimbabwe, Namibia, Turkey, Israel/West Bank, Jordan, Romania, Ukraine, Moldova, India + Kashmir. Istanbul was a base of sorts, I spent about a month there on and off. I used to whirlwind but I’m now discovering the joys of slow travel. 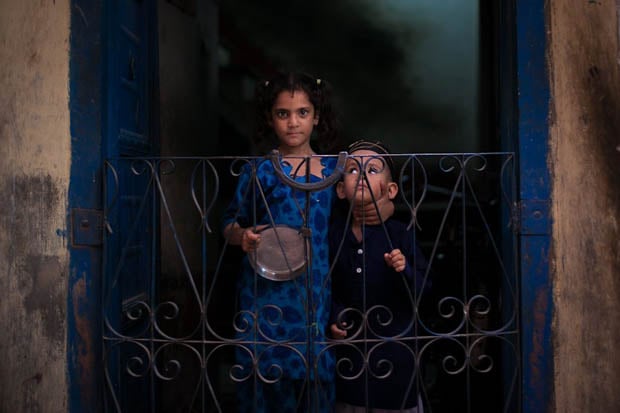 PP: What camera did you start with, and what are you shooting with these days?

EH: Nikon D7000 and three lenses which were stolen on a bus in Chile in fairly un-dramatic fashion, which I wrote about here. Insurance eventually covered it. Now I’m using the Canon 5D Mark II with a 35mm 1.4. I like the primes.

PP: What kind of insurance do you recommend for someone who wants to do what you do?

EH: I used World Nomads which covers medical, evac, and luggage. They covered my stolen Nikon kit, but having photos of the gear, receipts and a photo of the police report helped my cause. 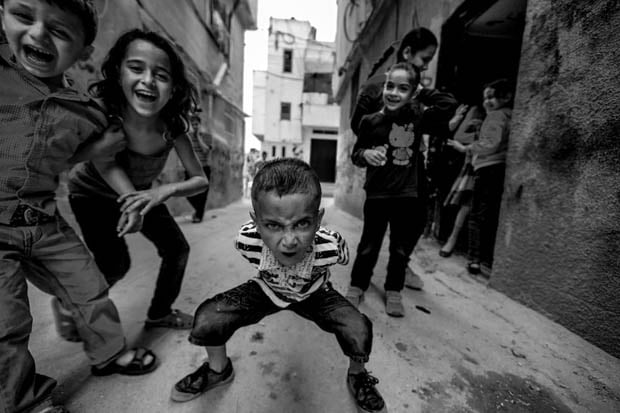 PP: Tell us about the craziest experience you’ve had so far in your photography adventures.

EH: The goal post for crazy seems to be a moving target. I try to always be respectful and intuitive, but I guess as one example: during a photojournalism workshop in Istanbul, my teacher and I were negotiating directly with Syrian ‘mafia’ to have ourselves smuggled illegally into Greece to document firsthand the refugee trafficking. We both accepted the risks, and sent “contact the embassy if you don’t hear from me in 48 hours” emails to our inner circles.

It didn’t end up happening for various reasons, which is probably a good thing, but while establishing contacts in the seedy neighborhood of Kumkapi we met many characters, including a guy who claimed to be a former Gaddafi bodyguard with a UN bounty on his head, and a gentlemen who threatened us on the street with a throat-slitting gesture. We didn’t wait for him to come back with a real knife. For most working photojournalists, I doubt this would rank in their top 10. I also got my 4×4 stuck in deep sand in Namibia and had to be recovered. Not fun. 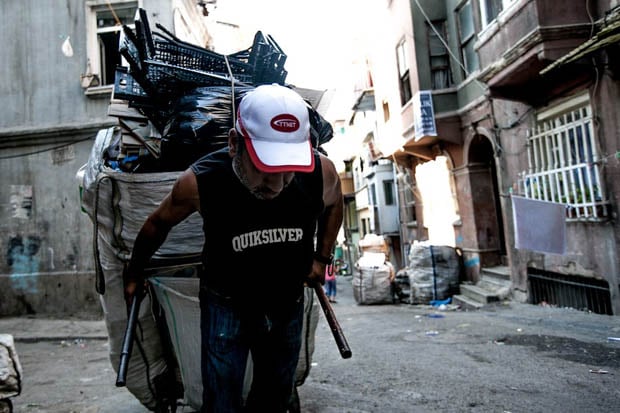 PP: How much of a budget does one need to travel the world like you do?

EH: Depends entirely on region and comfort threshold. I tend to deprive myself of niceties for stretches by staying in divier places when abroad or sleeping in a car when I have one. But then I recharge at a nice hostel or AirBnB for a night. If you’re willing to make the effort, communities like couchsurfing and WWOOFing are making it easier to travel for next to nothing. In the US, an iPhone app called AllStays is key for finding campgrounds with showers, etc. 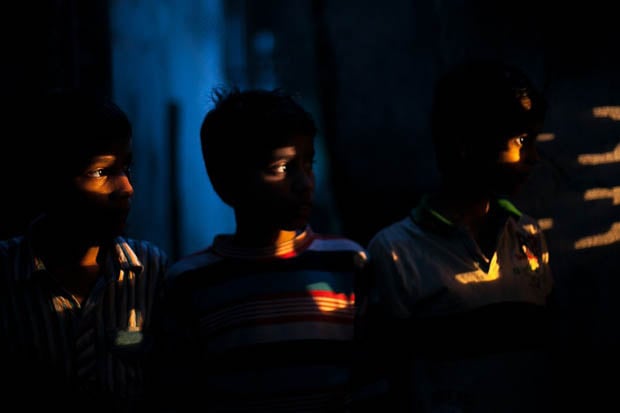 PP: What’s the most important thing about photography you’ve learned so far? 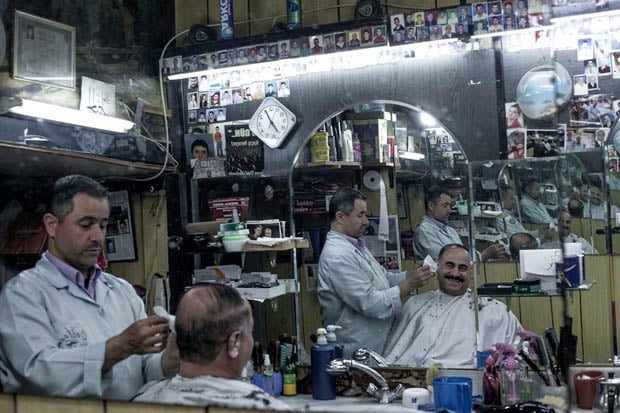 PP: Can you tell us about the single photo you’ve taken that you’re the most proud of?

EH: It would probably be a different answer by this time tomorrow. I’m not overwhelmingly proud of anything I’ve done yet. Maybe in a few years I’ll be able to answer this question more directly. 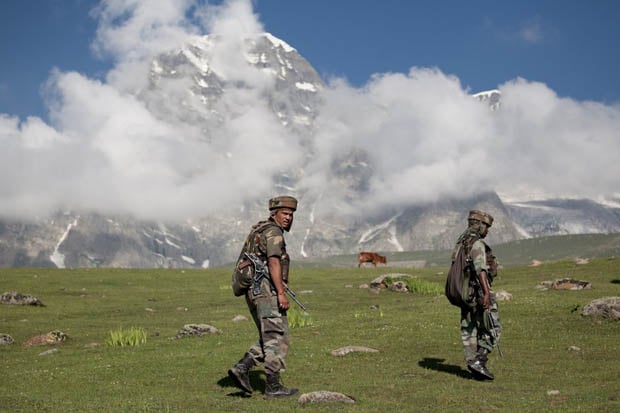 PP: How much of your day do you spend shooting and editing photographs?

EH: On average maybe 3 hours of shooting and 2 hours of editing. Most of my time is spent exploring, getting around, waiting for good light, looking for scenes and locations that interest me, fiddling with Google Maps, figuring out where I’m going to sleep and eat. 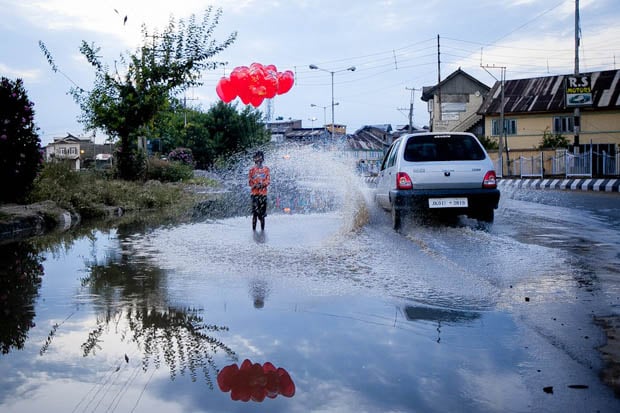 PP: How do you approach photographing strangers in the various countries you’ve been to? Have people generally reacted to your picture-taking in the same way?

EH: Depends on place and culture, but generally people are people. If you’re respectful, confident, and smile in a non-creepy way before asking to take a picture, then the response is usually positive. If there’s a language barrier, make eye contact and gesture with your camera. I often try to chat people up a bit or at the least stand next to them and gauge the vibe before clicking away. I’ve been told to get lost plenty of times. I think it goes with the territory.

Of course, if you’re going for a real moment or street scene, the trick is to be unseen in the first place. Or shoot first and ask forgiveness later. It’s like that old maxim of scientists, you can’t observe nature without changing it. Or something like that. 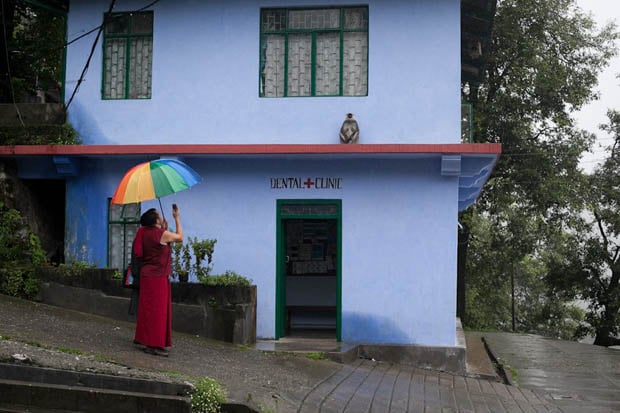 PP: Are you entirely self-taught in photography?

EH: No, I did a 7 day photojournalism workshop in Istanbul in April. Otherwise, yes, but being self-taught has meant devouring knowledge from other people on the Internet and spending a lot of time looking at other portfolios. I’m still honing my own vision and style and learning how to edit and tell a story properly. 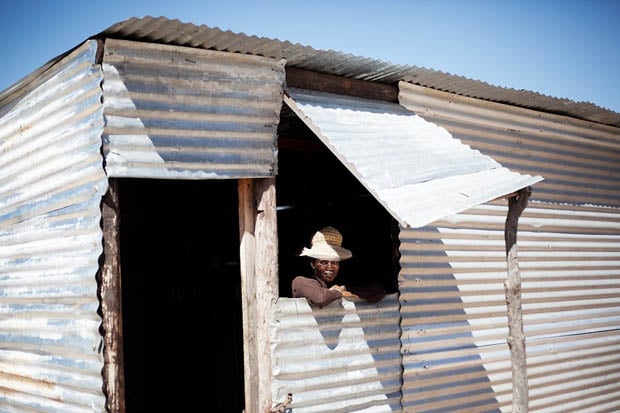 PP: What advice would you give someone who wants to follow in your footsteps?

EH: Well, I’d caution that I don’t know where those footsteps lead. But if you’re like me and the thought of expiring before ever taking a real risk to do something you love is constantly nagging at the back of your eyelids, and you have the means, then you’ll find a way. Or you won’t. You don’t need to travel the world to make good pictures. 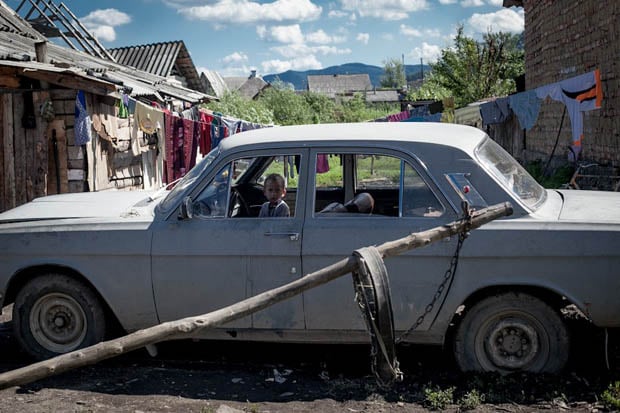 PP: What’s next for you?

EH: I’m back on home turf shooting in the midwest on a 3 month road trip across the US and Canada. I have a few ideas for photo essays, but I also wander around strange places talking to strangers and seeing what comes my way. One story I’m considering revolves around families of drone pilots in the air force and life in base towns in New Mexico and Nevada. Sort of a daily-life angle to lift the veil on the domestic side of this trend in modern warfare. Flying sorties over Pakistan and home in time for dinner with the wife and kids, etc. I expect lots of obstacles getting access.

A photo agency recently offered to represent me, but that just means I have distribution for my stronger images. I’ll start looking for jobs in my previous line of work again soon, because I can’t make a living this way. I should probably utilize Kickstarter, but feel weird soliciting handouts when I haven’t yet proven myself worthy. And besides, who wants to spend a week mailing signed postcards for a bunch of $5 donations.