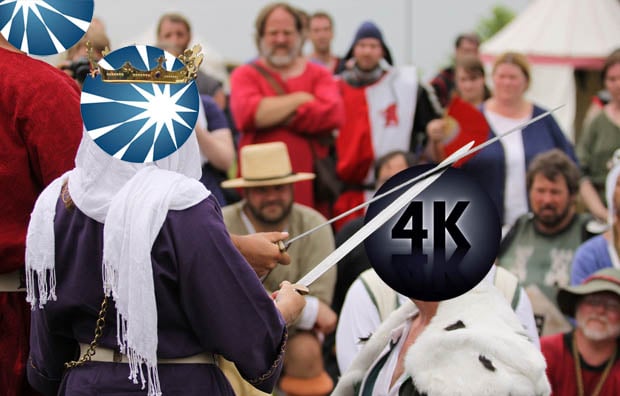 4K-resolution video capabilities are finding their way into more and more cameras these days, even though monitors that can display the resolution currently cost as much as one or two family sedans. Heck, even the tiny new GoPro Hero3 can shoot 4K, albeit at a semi-useless 15fps.

Although photographers and filmmakers can’t do too much with 4K footage at the moment, there will come a time when it’s the new 1080p. When that time comes, will we still be calling it “4K”? If the Consumer Electronics Association has its way: no.

The industry body announced today that it has come up with some formal names and definitions for 4K technology.

From now on, 4K video “should” be referred to as “Ultra High-Definition” or “Ultra HD”. HD is a commonly used term these days, so consumers should have no problem picking up on what “Ultra HD” refers to.

The association also decided that the minimum standard for any display to carry the Ultra HD badge is that it needs to be capable of displaying 3840×2160 pixel video.

While many or most manufacturers may begin using these terms and standards without complaint, Sony — itself a member of CEA — is already trying to rock the boat. CNET quotes a Sony spokesperson as saying,

To ensure clarity for consumers and delineate between today’s and tomorrow’s technology, Sony will continue to use the 4K moniker for its products and will market its future products as 4K ultra-high-definition (4K UHD).

This isn’t the first time Sony has tried to buck industry trends in order to do its own thing.

We’ll likely see a number of new 4K-capable — er, Ultra HD-capable — displays announced starting early next year at CES 2013. We’ll know then whether the new moniker is well-received or not.

Image credit: Photo illustration based on Ostwald Knighting, Their Majesties Raising a New Knight by kuminiac