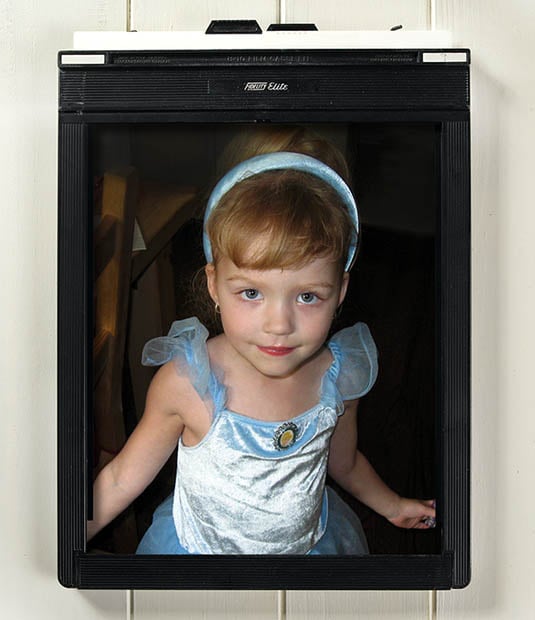 Do you have old large format film holders lying around that you no longer have any use for? You can breathe new life into them by transforming them into nifty picture frames.

Since we have been in business for over 15 years, we have a large closet full of old large format film equipment. One of the items we have in abundance is the sheet film holder. Messing around one day, we realized that they make cool frames.

Just make your prints the size of 8×10 or 4×5 sheet film. Slide them in from the bottom just as you would with a piece of film. Take the dark slide you pulled out and, with a utility knife, cut just below the white area and reinsert. You can hot glue picture frame hardware onto the back or drill holes into the holder to mount your new frame on a wall. Changing prints is easy and is done through the bottom.

If you have multiple film holder frames, you can create a collage for your wall: A Flickr photographer named Steve had the same idea, and writes,

With film photography, particularly medium to large format, on the decline, items such as 5×4 film holders are available on eBay dirt cheap. I had a bunch left over from my Speed Graphic days and wondered what to do with them. Playing around with some scrap 6×4 prints I discovered that these holders were ideal ‘frames’ that took a 6×4 and stood up on any flat surface.

Essentially the trick is no more than making a print on 6×4 size paper or cutting down a larger print and then carefully feeding the print through the felt lined light trap entrance, where the film used to go and then trapping the end of the print in the film catch slot. If you have double sided holders then you will need the dark slide or another print to hold the reverse side catch slot closed. Joby Laid the Smackdown on GorillaPod Counterfeiters During Photokina

A Look at the Image Quality of Plustek’s $2,000 OpticFilm 120 Film Scanner