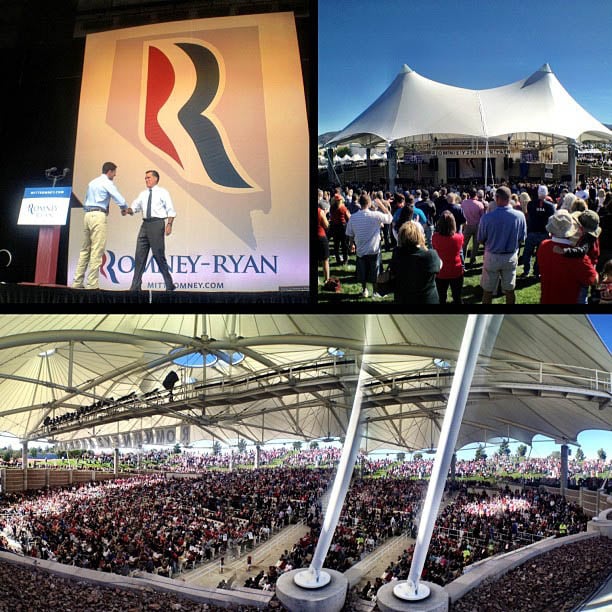 A botched Photoshop job or a camera app gone wrong? That’s the question being asked of one particular photograph that was recently posted to the official Instagram account of Mitt Romney’s presidential campaign.


The photograph (above, at bottom) was captured at a rally held in Nevada about a week ago, and shows a large crowd assembled to hear the presidential hopeful speak. Problem is, there’s clearly something wrong with the photograph.

Here’s Zeke Miller of BuzzFeed’s analysis of the image: 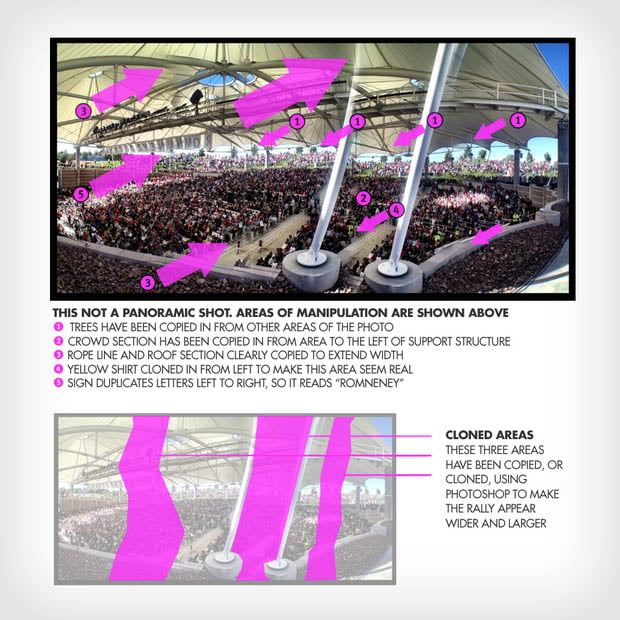 It seems like a clear-cut example of shrewd Photoshopping for political purposes, right? That’s what a lot of people think.

The photo has also attracted over 1,000 comments, with many of the newer ones left by people mocking the apparent poor ‘shop job.

However, other commenters point out that the photo could very well be a poorly auto-stitched panorama created using an app. Rather than being intentionally manipulated, the image could be the result of separate photos incorrectly spliced together.

Just a couple of weeks ago we were sent this strange-looking panorama by photographer Adam Thompson, who wrote, “Check out the hilarious effect I got using the iPhone’s panorama feature”:

Someone might look at the image above and think, “Wow… Half of each car was ‘shopped off!”

This month we were also sent the following panorama, shot using the same iOS 6 Panorama app, by Kyle Hart of Rhino Camera Gear. It’s a “single exposure” that shows his brother Ryan twice:

These images show that photo-stitching and panorama apps can — and often do — produce wacky results (both intentionally and not). Since the Romney campaign panorama at the center of the controversy was shared through Instagram, which is only available on mobile devices, it seems likely that it was also shot/created using some kind of mobile camera app.

Regardless of whether the photo was a intentional ‘shop job or an innocent stitch glitch, it’s definitely one should have been spotted and rejected by someone in the campaign, especially because it does portray a crowd to be larger than it actually was. It’s just that in our age of fallible camera apps, we mustn’t rush to rash conclusions regarding cause and motive.