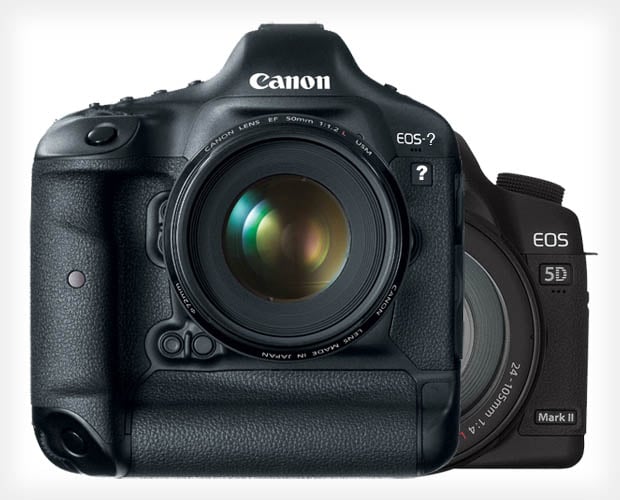 Two interesting Canon rumors are currently floating around. The first has to do with the 46MP DSLR that Canon is reportedly field testing and may be planning to unveil in late October. Northlight Images received a tip saying the camera’s body will be 1D-X-esque:

In an update to the high MP info, we’re told that a camera will eventually appear in a 1D X derived body, in the same way as the 1D C. The information said that the actual designation was not known, but it would essentially be a ‘1 series’. There was also a warning that there would be a long wait between any ‘preview’ and any cameras being annouced and subsequently shipping.

If true, this means Canon is going for the larger pro-style body rather than following after Nikon’s 36.3MP D800.

The second rumor is that there’s a massive price drop coming to the Canon 5D Mark II. Canon Rumors writes that the price will be dropped down to $1699 within the next week, and will stay at that price point until the camera is out of stock.

It’s a move that makes a lot of sense for Canon, since having the 5D Mark II remain in the product lineup would continue to cannibalize the new Canon 6D. Scratching the 5D Mark II from the roster would allow the 6D to take its place as Canon’s true “entry-level” full frame — especially as the price on that camera starts its downward march.