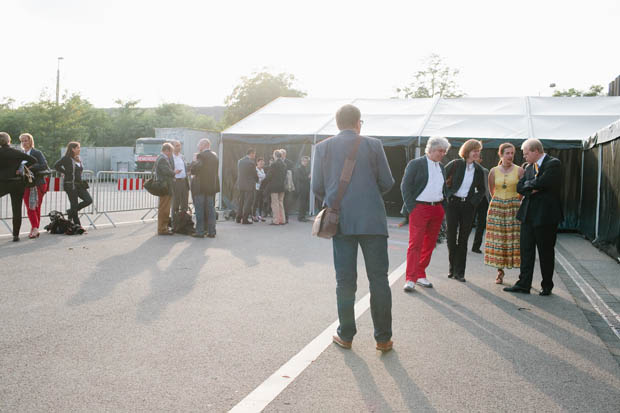 Some weeks ago, I received an invitation from Leica for a special launch party they were planning to hold the day before Photokina 2012 opened. The event was titled LEICA – DAS WESENTLICHE, which translates to “The Essentials”. Aside from stating that there would be product premieres and “photographic and musical highlights”, the invitation did not reveal much else about the event, which went down this past Monday. Here’s a first-hand account of what it’s like to attend one of these Leica parties.

I arrive at the venue, Hall 1 of the Koelnmesse (AKA the Cologne Exhibition Centre), about fifteen minutes early. The entrance is a black tent set up outside the building. A number of guests are gathered around, waiting for the doors to open.

Pretty much everyone I see is dressed very sharp, and many of them have Leica cameras hanging from their necks or clutched in their hands.

I, on the other hand, am wearing an absurdly wrinkly dress shirt, holding a Canon DSLR, and have on my back a black “college student” Jansport backpack containing my Macbook Pro. For a brief moment I feel more like a tourist who has lost his way than someone who is supposed to be there.

A few minutes before 6pm, they begin welcoming us in. The people inside the tent collect our personalized tickets and then direct us through to a large elevator that’s used for transporting vehicles, mountains of boxes, and… groups of people. 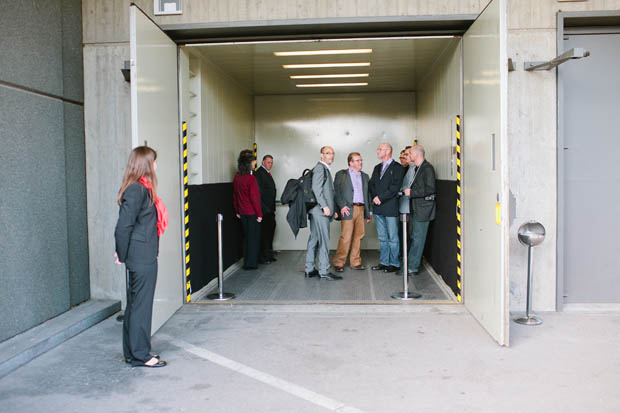 Are we going down to some secret underground chamber? Nope. The elevator begins to travel upwards.

The sizable hall has been transformed into a sleek black photo gallery featuring some of the biggest names in the business. In the center of the chamber is a cone of light created by a hanging projector. Guests are taking turns having their pictures taken by friends while standing in the rays of light.

As I walk up to it, I snap a few photos of the man and woman taking their turn inside the cone. 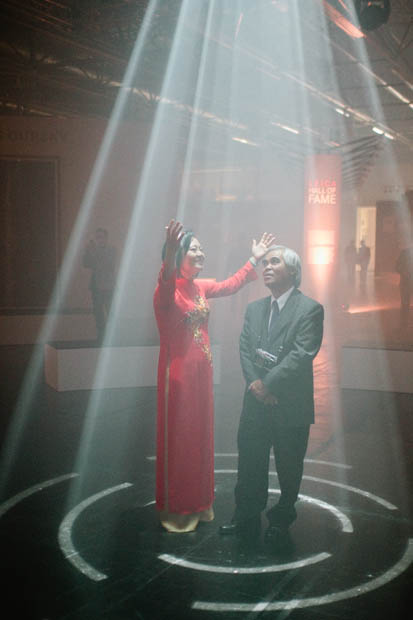 They seem popular, as a number of people are huddled around and snapping away. I ask one of the picture-takers who the two people are. “That’s Nick Ut,” she says. “He took the picture of the “Napalm Girl.” Turns out the woman is Kim Phuc, the Napalm Girl. Photographer and subject of an iconic photo, together in the same cone of light. That’s like… the definition of a Kodak moment.

I suddenly realize that I had seen them in the morning at my hotel’s breakfast buffet. I remember hearing them talking about Leica, but had no idea who they were at the time. Silly me.

One side of the hall is dominated by a stage and chairs. On the stage are four mysterious black pillars illuminated by spotlights. I assume that soon-to-be-announced products will be placed on top. I count roughly 13 rows of chairs on each side of the center aisle, and 10 or so chairs per row. 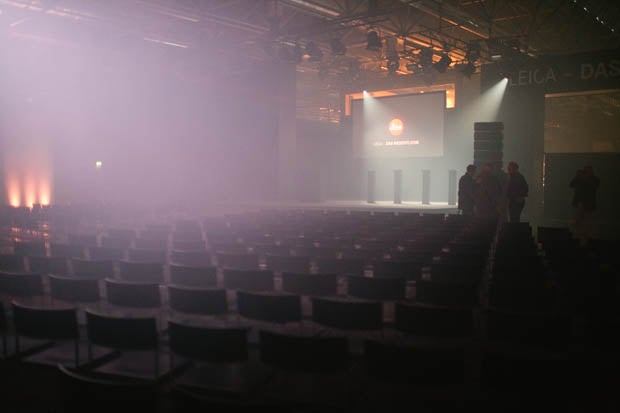 The first 5 rows on each side are reserved. As I shuffle sideways through the rows, I recognize many of the names as well-known photographers. Nick Ut on one side. Steve McCurry sitting next to David Burnett on the other. 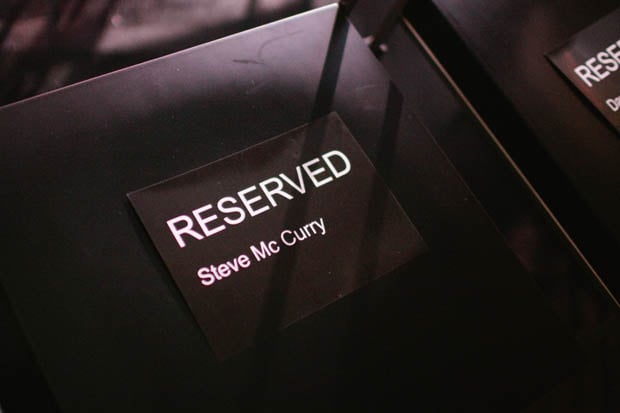 To my shame, I don’t recognize a majority of the names there. This is most definitely due to my own ignorance, as I’m quite certain that most, if not all, of the names are worth knowing. Hurrying back to the sixth row, I set my backpack down to reserve my own seat. “No one’s going to steal my stuff at an event like this”, I think to myself.

Leica is serious about food and drink playing big roles in its merrymaking. There are a number of stations around the hall that are overflowing with everything one might want to quaff: wines, cocktails, beers, coffees, juices, and waters (carbonated water — or “gassed” water, as it’s called — is quite popular in Germany). 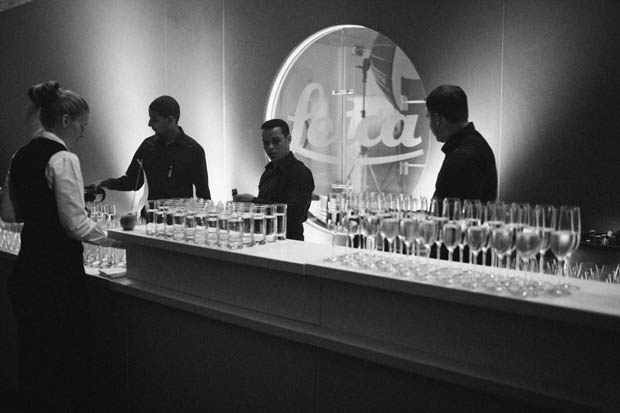 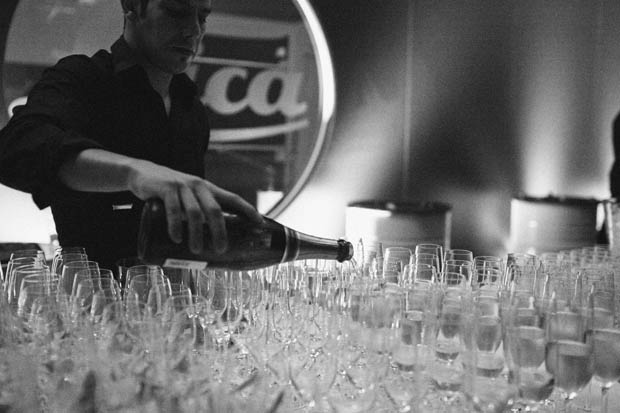 Throughout the night, young men and women roam the halls with platters of food. The night starts off with appetizers, which include quiche and small crispy cones filled with things like fish, beef tartar, and avocado. Later on, a “flying buffet” begins, as the platters begin holding meats, fishes, and raviolis. 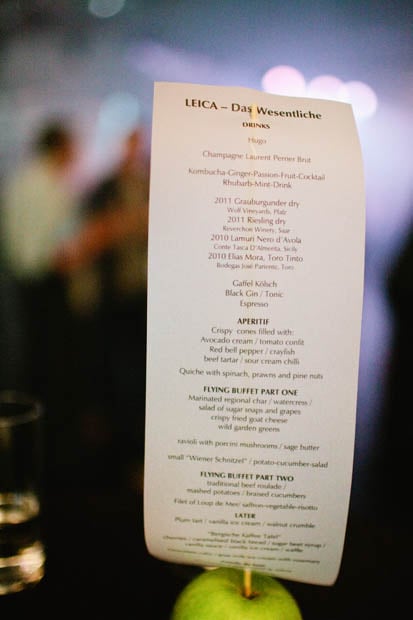 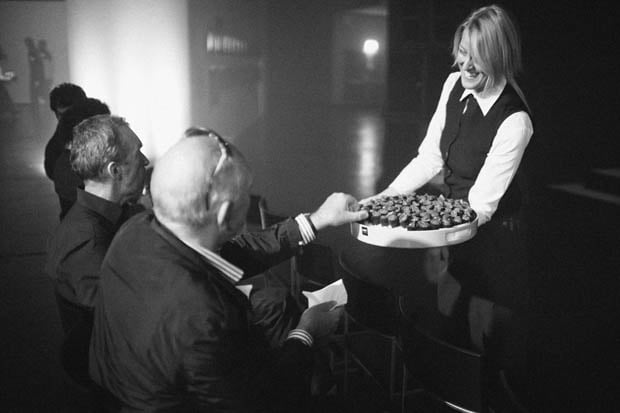 The fog begins to clear up as more people arrive. A little more than an hour after the doors open, the show begins. Although I start off sitting in my 6th row seat, I quickly learn that the seats are not the place to be if you want pictures. 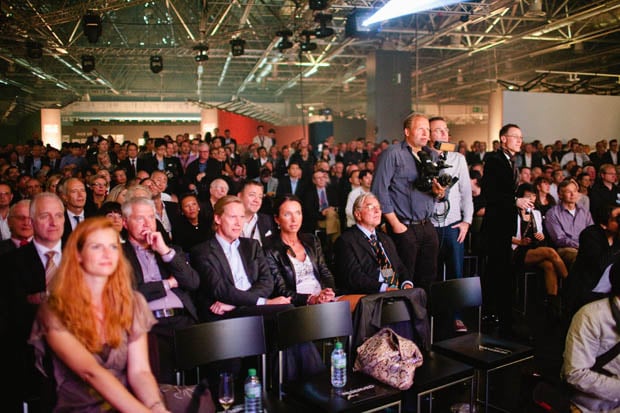 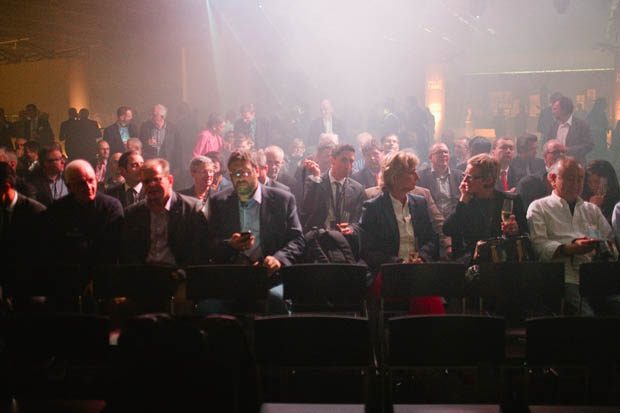 A good number of non-sitters begin to inch their way forward as a German TV host appears on stage with some words of welcome and a couple of one-liners to break the ice. 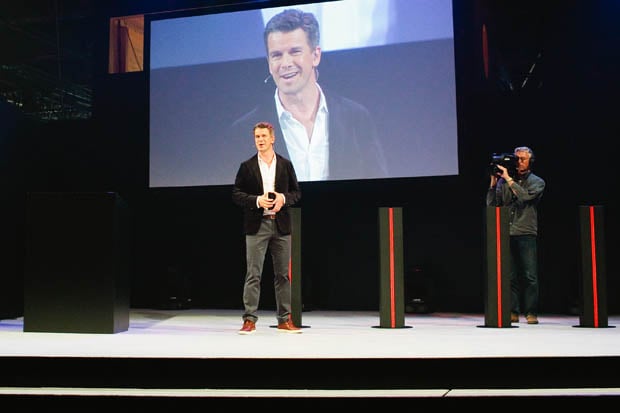 I decide to leave my seat as well. As each photographer moves closer to the stage, others are emboldened to move even closer. I soon find myself perched on the first step of the stage, with a wall of other photographers on my sides and behind me. 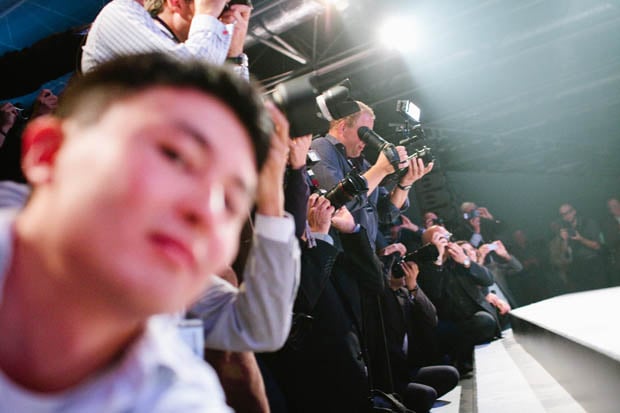 The first portion of the presentation features the TV host, Leica’s CEO Alfred Schopf, and the wife of Leica’s owner as presenters. They explain that founder Andreas Kaufmann couldn’t be there due to sickness. After unveiling a new book, they ask Nick Ut and Kim Phuc to come on stage. Nick and Kim are given a brief interview, and then Nick is announced as this year’s Leica Hall of Fame award winner. Some other well known photojournalists are welcomed onto the stage and introduced. The group then poses for a photo together. 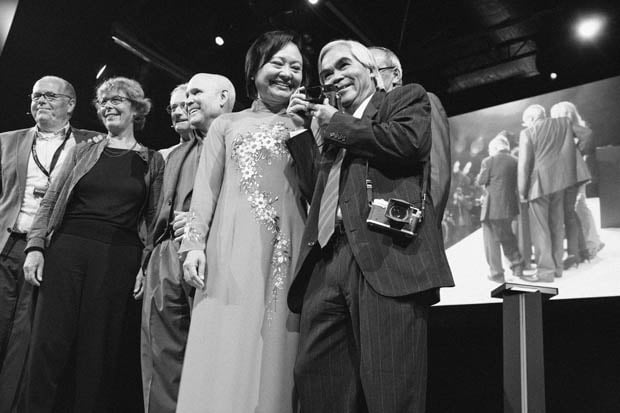 Next up is the grand opening of the gallery. With a flourish, all of the exhibition lights are turned on, illuminating the previously darkened photographs hanging on the walls.

We’re given an hour-long break to enjoy the images, the food, and one another’s company. 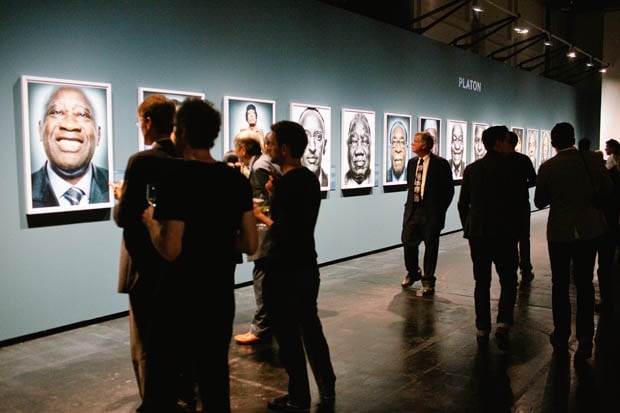 A giant photo is prominently displayed in the center of the gallery. It’s a Gurksy shot on 35mm film using a Leica. I wonder how many houses this one print could buy. 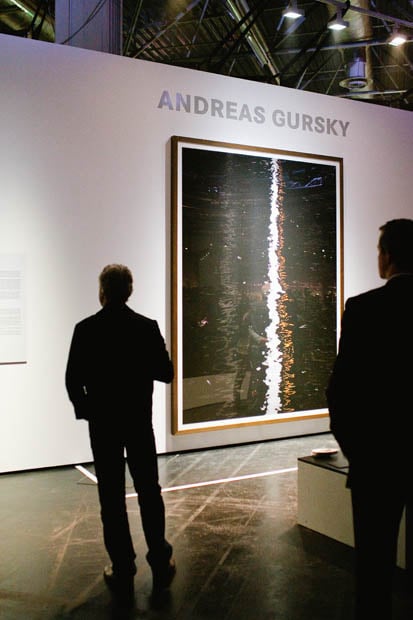 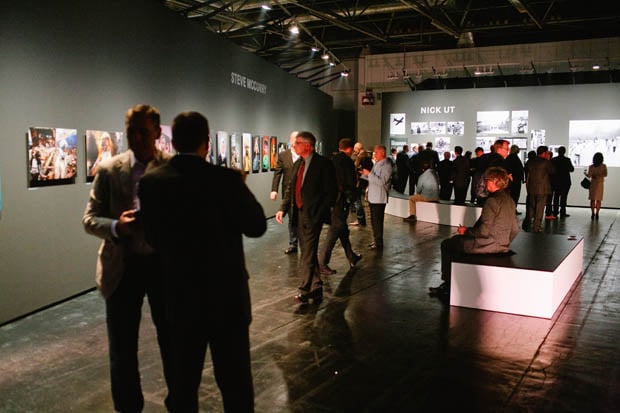 When the show resumes, Schopf unveils three new cameras: a limited edition X2 designed by Paul Smith, the Leica S, and the Leica M-E. Each camera is brought into view by opening one of the mysterious black columns, revealing the camera sitting on a white pedestal within.

As everyone’s attention turns to the fourth and final column, Dr. Kaufmann himself suddenly strolls onstage to break the news. Apparently his health has taken a miraculous turn for the better. His announcement is the new Leica M. 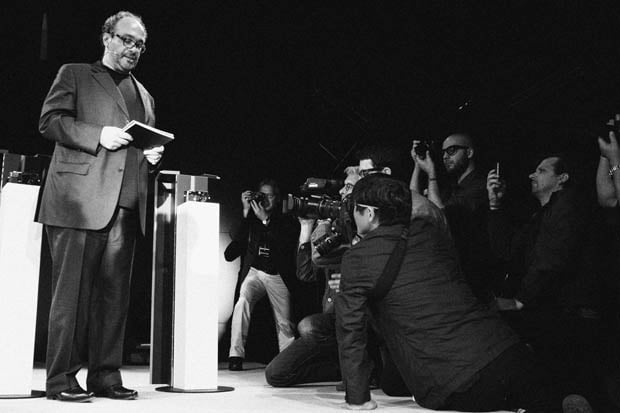 All four cameras are now outed, and guests begin rushing to the front of the room. Everyone wants to get up close and personal with the new gear. Journalists are crowing around for first-look shots, and some even pick up the bodies for hands-on photos — much to the annoyance of the people around them. 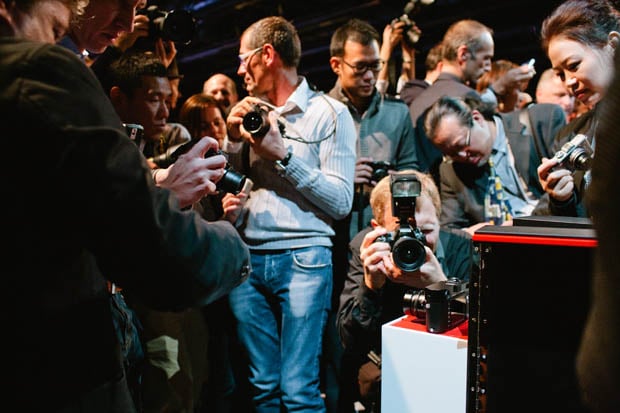 To the right of the stage, the wall is now gone, replaced with a massive gateway into a previously hidden section of the hall. This area contains booths for each of the Leica camera lines. It’s the main gear booth for Leica at Photokina.

After a while, I see that musical equipment is being arranged on the stage. As people begin crowding around at the front, I ask the Leica employee I’m chatting with, “Who’s going to be playing tonight?” 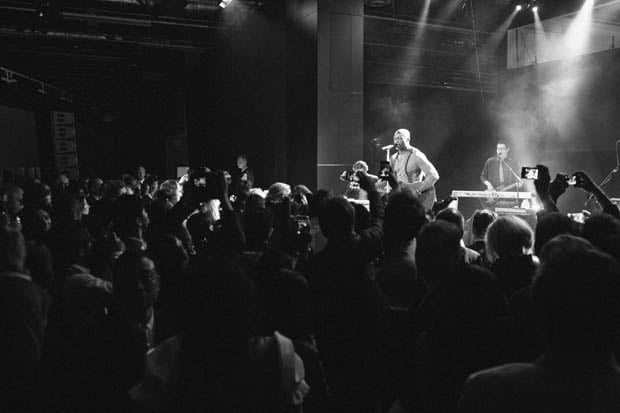 As many of you probably know, Seal is something of a Leica aficionado. Last year, he was spotted out in public with a yet-unannounced Leica camera — a prototype of the digital MP — which caused quite a murmuring in the online rumor mill.

The crowd isn’t too big or dense, so I’m quickly able to reassume my favorite spot on the first step of the stage. Some of us are so close that we could reach out and poke him if we wanted to. 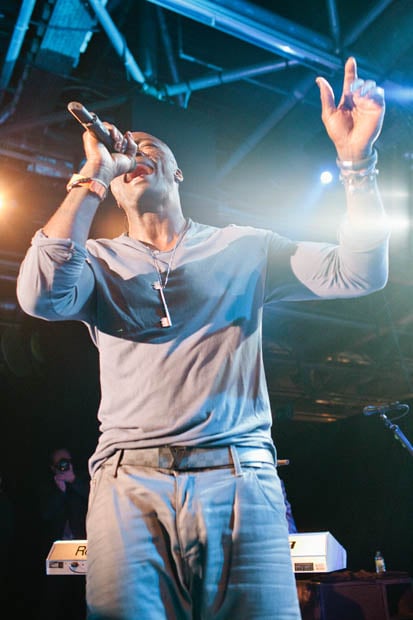 Glancing behind me, I see that Nick Ut is snapping away with his smartphone. Yes, Pulitzer Prize-winning photographers shoot smartphone snapshots just like the rest of us. 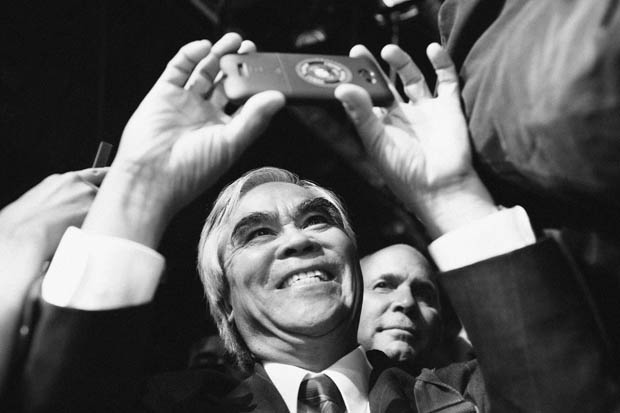 Behind Nick, Steve McCurry is watching the photo being snapped with an enigmatic expression. I can’t tell whether it’s a look of approval, amusement, or disappointment. Seal interacts with McCurry in between two of his songs. He says a few words expressing how much respect he has for the McCurry and then shakes the photographer’s hand. 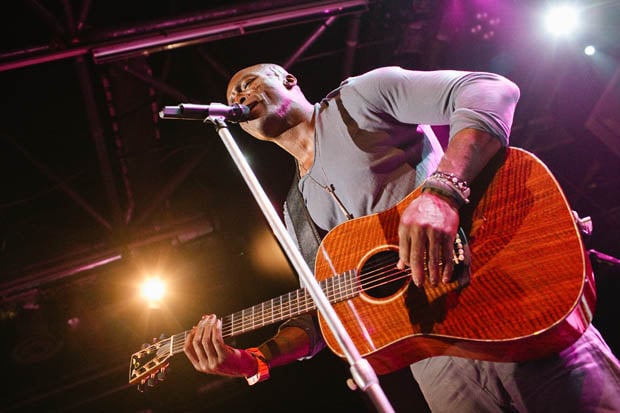 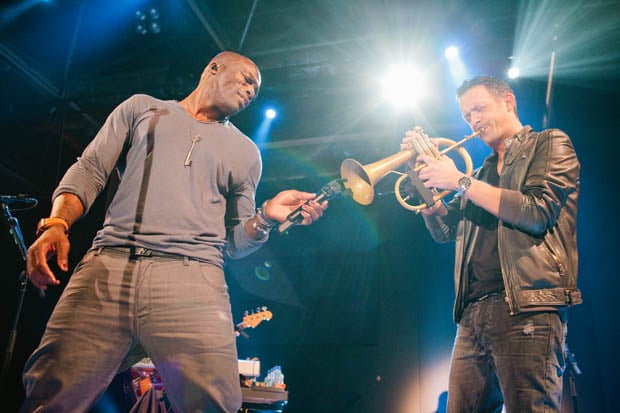 After an hour of awesome music to cap off the night, Seal makes his departure, and so do I.