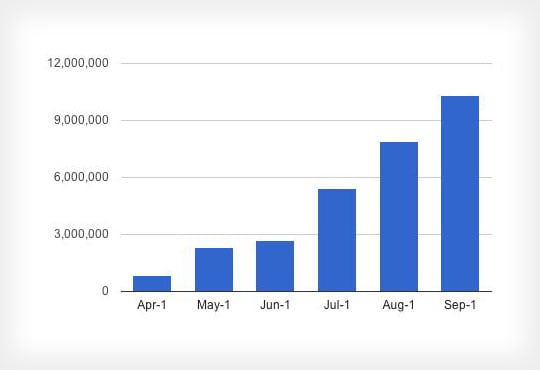 Zuckerberg’s crazy $1 billion purchase of Instagram 6 months ago is now looking like a steal. BusinessInsider writes that the photo sharing app, which ended up costing just $735 million when the deal finally closed, has seen meteoric growth since the purchase agreement was made:

Mark Zuckerberg did a lot of things wrong during the first half of 2012, leading up to and through Facebook’s few months as a public company. One thing he did well was buy Instagram for $1 billion. It turns out that was a bargain.

Back then, the photo-sharing app for Android phones and iPhones had 860,000 daily active users. Today it has 11 million. That is 1179% growth in six months.

They also point out that photo sharing site Pinterest, which has far less users, has in recent months turned down acquisition offers of over $2 billion. Instagram has 30.3 million monthly users, and just passed the 100 million registered users mark. These astronomical prices being thrown around make Yahoo’s $35 million — the rumored figure — purchase of Flickr look like an absolute steal. Too bad they haven’t been able to do much with the service so far.

Zuckerberg’s Huge Win: Instagram Proves To Be A Bargain At $1 Billion [Business Insider]