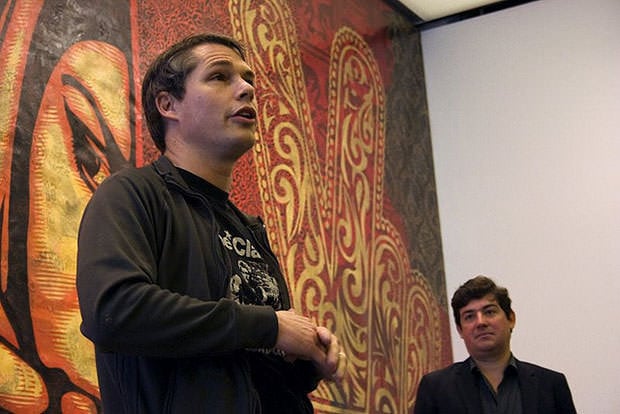 Shepard Fairey avoided jail time after all. The Obama HOPE poster artist was sentenced today to two years of probation and a $25,000 fine for using an AP photo without permission and then destroying evidence to cover his tracks. The New York Times writes that the entire dispute will be an interesting case study for fair use law:

When the case began in 2009, Mr. Fairey argued that his use of Associated Press imagery constituted fair use under copyright law. But the civil lawsuit was settled before that question was decided, and the two sides agreed to financial terms that were not disclosed. The parties also agreed to share the rights to make posters and merchandise bearing the “Hope” image. Mr. Fairey maintained that he had never personally profited from sales of the image, a contention The A.P. disputed.

[…] Until the settlement between Mr. Fairey and The Associated Press, the case was watched closely as one that might define more clearly the murky issues surrounding the fair-use exceptions to copyright protections. One of the central questions was whether Mr. Fairey’s creation, which became ubiquitous on street corners and T-shirts during and after Mr. Obama’s campaign, constituted a “transformative” use of the photograph, a use that is allowed under the law so that creative expression is not stifled.

In his official statement on the matter, AP CEO Gary Pruitt states, “We hope this case will serve as a clear reminder to all of the importance of fair compensation for those who gather and produce original news content.”

Image credit: Shepard Fairey at the ICA by WBUR