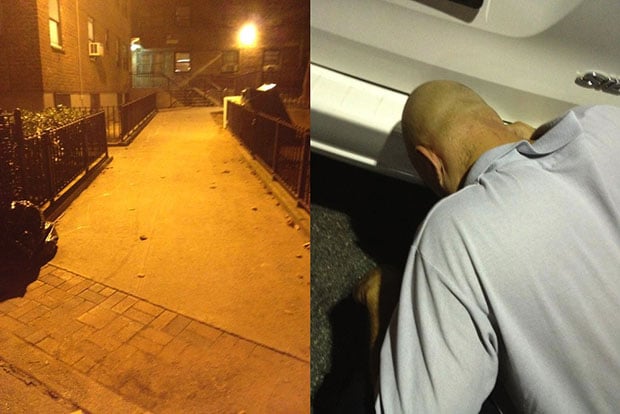 Brazilian Jiu-Jitsu fighter Renzo Gracie was walking on the sidewalk at 22nd street and 10th avenue in Manhattan last night, when he noticed two shady-looking fellows following him. Suspecting that they were planning to mug him, Gracie began sending live tweets and photos to his 100,000+ followers on Twitter. Once the two men finally approached him, asking for a cigarette, he decided to launch a preemptive strike by beating the crap out of the would-be assailants… while live-blogging the whole thing.

Here are some of the tweets sent out (two of the photos are shown above):

22nd street and 10th ave right now two guys following me, can’t help but have a big smile upon my face Im talking about a happy one )))

I just stop to take a pic, they pretend they are looking at the window, can’t lie… My blood runs in a different speed, man I miss Brazil

Please hold there for just a couple minutes be right back

They are coming closer, asking for a cigaret lol can’t help but have a smile in my face. I don’t smoke. Pretend to wobble. They smile

This one asks me why did I do that, pretending to be stupid, one little kick to the ribs makes him whine and apologize, as I’m writing this.

I ask him if he was planing to rob me, he says no. All he wanted was a cigarette, lol I can’t help but have a big smile upon my face, and ..

After giving one fellow a pounding while the other ran away, Gracie drove around the block looking for the other guy. He then found him, “choked him out 3 times”, and “raccooned” him, which apparently means doing stuff to make the other person wake up looking like a raccoon.

So basically, Gracie played iPhone photojournalist in documenting his own “attempted mugging” and counterattack. Either that, or he documented himself assaulting two innocent people on the streets of New York City.

The Internet is making photo-sharing weird.