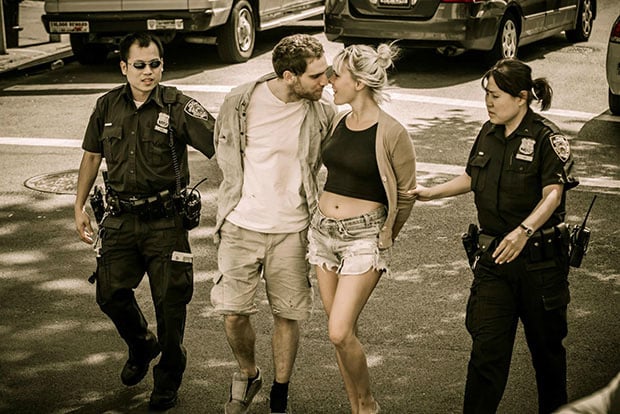 Photographer Mo Gelber was standing outside the Manhattan Criminal Court on August 16th when he noticed a couple being led in handcuffs toward the courthouse by two officers. Just as they were about to enter the building to be booked, the young man leaned in to his significant other for one last kiss. Gelber instinctively snapped a photograph, resulting in the picture-perfect image seen above.

Pleased with how his picture turned out, Gelber decided to enter it in the Project Imaginat10n contest put on by director Ron Howard and Canon. Out of the thousands of photo entries, only 10 will be selected as the basis for a short film series.

His photograph was well received, but Gelber soon ran into a roadblock: he was told by the contest’s staff that he needed written permission from the subjects of the photo in order to qualify for the final round, which it was being considered for.

Gelber then decided to turn to the Internet in an effort to locate the mysterious couple. After sharing the photo on his Facebook page, the story was picked up today by the Humans of New York project, where it attracted tens of thousands of likes and thousands of shares.

A short time later, Gelber was contacted by a 28-year-old woman named Alexis Creque, who identified herself and her 26-year-old boyfriend as the couple in the photo. Turns out the two were arrested after a nighttime graffiti spree in which the Creque acted as the lookout. The man is still behind bars somewhere in New York.

To further complicate matters, Creque has informed Gelber that she won’t agree to sign the paperwork until her beau is freed from prison. Gelber is hoping and praying that the man is released from police custody in the next couple days, since Saturday is his deadline for turning in the paperwork.

Creating a Daguerreotype Plate Using the Becquerel Method, From Start to Finish