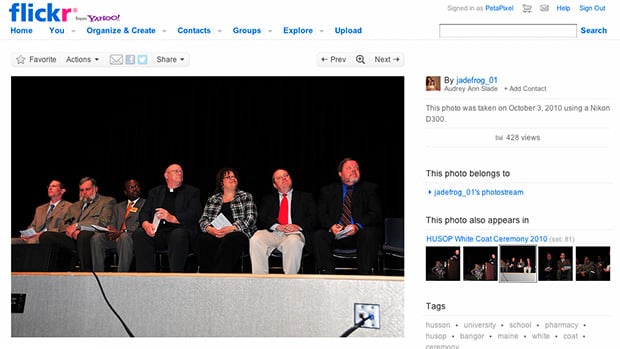 The Portland Press Herald has agreed to fork over $400 to a woman named Audrey Ann Slade after its use of one of Slade’s photos sparked a furious fair use debate online. The paper published a story last week about Reverend Robert Carlson, a minister who committed suicide recently after being accused of abusing young boys. Specifically, the piece reported on the fact that Slade’s photos proved that Carlson continued to engage in on-campus events after resigning abruptly in 2006 from his position as chaplain.

It decided to publish one of Slade’s photographs — both online and in print — showing Carlson at a 2010 ceremony held on campus grounds. Problem was, they badly mishandled the process, and neither contacted Slade nor attributed the photos to her.

When Slade came across the article, she was startled to see that her image was being used. She then sent the following email to the higher-ups at the newspaper:

My name is Audrey Slade, and I am the “former administrative assistant” described in this article.

I write to you with a lot of very mixed feelings. Imagine my surprise when I saw this article posted on Facebook, with a photo that I had taken several years ago. Then to read the article and see that my photos were being alluded to as evidence of Bob Carlson’s involvement in activities at Husson after 2006. Then to further see that my title was being associated with this.

And my ultimate shock that I was not contacted at all about any of the above. No contact at all. Aside from the disappointment of having my intellectual property being used without even so much as an indication that it was going to be lifted from my flickr accounts, it was also unethical to use these photos without either giving me the benefit of at least asking me if they could be used or asking if I wanted credit for my photos that you used without my permission. (I do not.)

At my core, I am so disappointed. I would respectfully request that you remove my photos and any indication of my title from the article. While there might be plenty of legal loopholes that make this article acceptable, ethically, it was handled rather poorly and has left me with quite a bad taste in my mouth.

After a day passed with no response, she sent a followup email:

Please see my email below from yesterday. Having gotten no response from anyone and seeing my photo is still up, I have consulted with members of the print, radio, and television media for guidance. The overwhelming response has been that since my photo has been listed on flickr as “All Rights Reserved”, the photo was taken by me, and I was not compensated by Husson for taking the photos, The Portland Press Herald did not have the right to use my photo without my consent. And even with the legality of it put aside, the ethically, it was in poor form and taste to use my photo without my consent. And especially unethical since you managed to refer to me as an individual through my title and based a good portion of your article on my photographs.

Where my photos are listed as all rights reserved, were taken by myself as an individual and NOT as a Husson Employee, and I was never compensated by Husson for them. I am demanding that the photo be taken down and no use of any of my other photos may be used in the future. For every day that they are not taken down (today included), I will be invoicing Portland Press Herald $100 a day.

Finally, after a couple more days of silence, she received the following response:

Dear Ms. Slade,
I apologize for the delay in getting back to you. I’ve read your emails regarding the photo that accompanied our story about Rev. Bob Carlson’s activities at Husson and wanted to explain our position to you.

Two factors played in our decision to use your photo: (1) We could not, by deadline, determine who the photo belonged to, and (2) we ultimately decided it was in the public’s interest to publish them. The story was, in essence, about the evidence that Rev. Carlson was still partaking in Husson activities for years after supposedly being told he was no longer welcome. Our publication of the photos constituted fair use of them. Moreover, they were on a public site (Flickr), available for anyone to view, with no obvious indication of ownership. Our staff did attempt to find out who took the photos before we ran them, but there was no contact information for the account holder on the Flickr page.
Again, I’m sorry it took us a few days to respond (it’s been a hectic week here), but I did want to convey our thinking to you.

Infuriated by the way the newspaper handled the situation (and its subsequent response), Slade penned a length blog post titled “Sure, it’s fair. But is it right?“, giving her account of what happened.

The post quickly went viral, and before long fellow photographers around the world were siding with Slade, bashing the Press Herald, and suggesting that she sue them.

On Reddit, where Slade’s blog post amassed over 600 upvotes and 100 comments, legions of commenters responded with comments about how the newspaper doesn’t understand what fair use is.

Although the whole story doesn’t sit well with photographers (understandable, given how mishandled the whole thing was), the whole thing might actually be a textbook example of what fair use is.

People around the web were stating that “fair use doesn’t mean you can use copyrighted photos without permission”, but that’s exactly what fair use law says. Here’s the definition found on Wikipedia:

In United States copyright law, fair use is a doctrine that permits limited use of copyrighted material without acquiring permission from the rights holders. Examples of fair use include commentary, criticism, news reporting, research, teaching, library archiving and scholarship. It provides for the legal, unlicensed citation or incorporation of copyrighted material in another author’s work under a four-factor balancing test.

In this case, the news being reported was the fact that there was evidence showing Rev. Carlson present on campus after he resigned. The evidence was in the form of Slade’s copyrighted Flickr photographs. They were illustrating a story in which her specific photos played a central and critical part, rather than a story about something else to which the photos just added a little flavor.

Thus, it seems to me that the newspaper did indeed have the right to report their story based on around Slade’s images, even without contacting her or compensating her.

Please don’t get me wrong — I can see the hate comments coming in already — I’m all for siding with photographers and reporting on copyright violations. In fact, we were privately dealing with defamation lawsuit threats a little while back for reporting on one such case. It’s just that this one is a bit different, and merits some thoughtful dialogue rather than senseless bashing.

In any case, please do drop by Slade’s blog and Flickr account, and show her some love!

P.S. Poytner has published a great non-biased look at the dispute that examines both sides of the issue.

Thanks for sending in the tip, Ellie!

Is This the Difference Between CCD and CMOS Camera Sensors? Nope