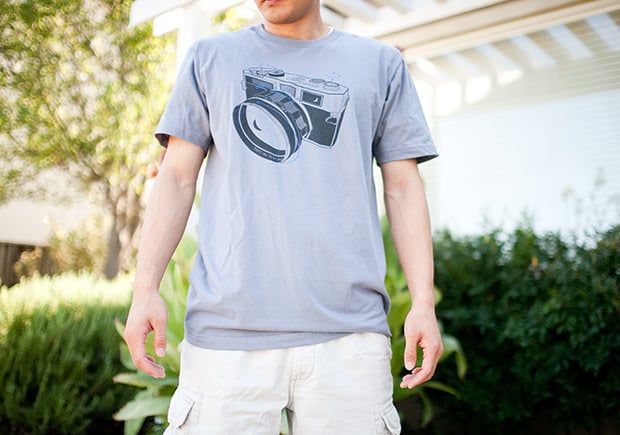 If you were to start a new clothing brand, who would you target? Athletes? Self-conscious youth? People with more cents than sense?

Earlier this year, NYC-based photographer Ted Rybakowski decided to focus on a relatively untapped demographic: photo enthusiasts who love themselves a good T-shirt. His clothing startup, Dodge & Burn, sells a line of T-shirts adorned with classic analog cameras. While we’ve featured a number of clever photo-centric shirt designs here before, Rybakowski’s brand is the first we’ve seen that focuses entirely on T-shirt fashion for photogs.

Rybakowski first gave us a heads-up about his project back in May, and DL wrote up a short post introducing the brand. Some weeks later, Rybakowski contacted us again, asking to send us some free shirts to check out. Here’s what we received: 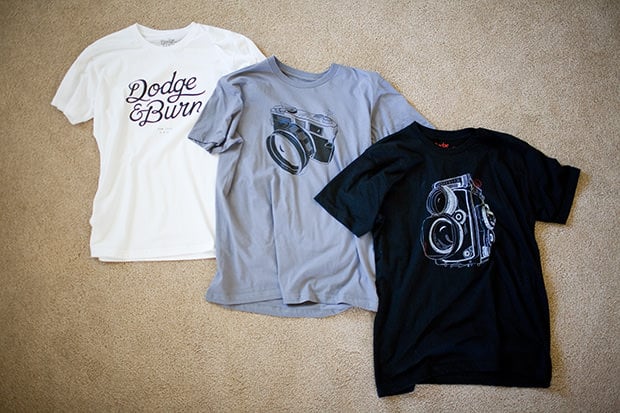 One of the first things I noticed about the shirts is that they aren’t simply custom designs printed on a low-quality, dime-a-dozen, off-brand shirts. You know what I’m talking about: shirts that are nice for a while, but quickly deteriorate and transmogrify into car-drying towels.

The kind you find in souvenir shops or splayed out on tables at college career fairs, given away by companies hoping to woo soon-to-be grads without devoting too much money to schwag.

Dodge & Burn shirts are printed in the US on American Apparel shirts. Peek inside the shirt, and you’ll find an elegant logo rather than an annoying tag: 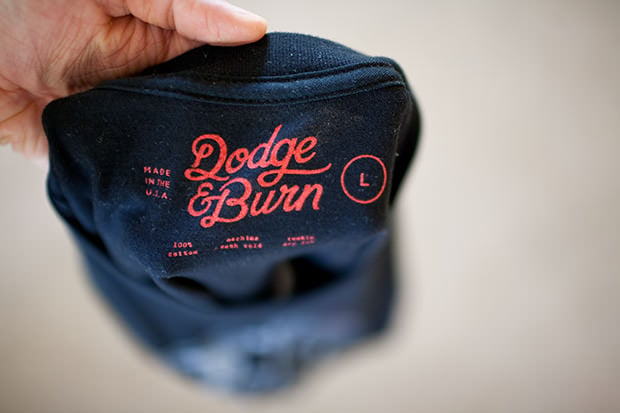 If you’re a fan of Threadless T-shirts, then you’ll feel right at home in a D+B shirt. After all, Threadless started out printing its designs on American Apparel as well, before growing large enough to switch over to its own brand of shirt.

D+B shirts feel nearly identical. The material is both thin and soft, breathable on a hot day, yet durable enough to hold up through wearing and washing.

Unlike most Threadless shirts and many of the shirts we’ve shared before, the designs aren’t meant to be witty, cheesy, or humorous. They’re simple, classy designs showing a single retro camera, with the brand name appearing somewhere inside (usually cleverly integrated into the art):

From my experience, simple designs get old (in your mind, that is) much slower than clever designs meant to be funny. After all, you can’t tell the same joke day after day and expect the same people to laugh (unless there’s something wrong with them).

As some of our commenters pointed out when we first wrote about these shirts, D+B isn’t the cheapest brand.

If you’re the type of person who waits for $5 or $10 sales before buying a Threadless shirt — no shame, I’m one of them — then you’ll probably shy away from the $29 price tag found on D+B shirts.

Do keep in mind, however, that most Threadless shirts have a non-sale price of $20 and up, so this is actually a 50% markup for photog fashion rather than a 300%-600% one. If you’re a photo enthusiast on the lookout for T-shirts worthy of your clothes hangars, then Dodge & Burn is definitely a brand worth taking a look at. We’re highly impressed with the designs, the feel, and the durability of the product.

In an alternate universe in which photography is a popular sport and photographers are all famous athletes, Dodge & Burn would be the sporting company that I would want to be sponsored by.

Since we don’t live in that alternate reality, just make sure your wallet feels the same way before jumping aboard!