On Monday, a group of four friends went on a fishing trip in the Pacific Ocean. Taking their boat “A Salt Weapon” 20 miles west of Santa Cruz, Mark Peters, Jeremy, Dave, and William were expecting a fun-filled day of albacore tuna hunting. What they ended up capturing was so much more.

Wanting to save some memories of their trip and film their battles with tuna from underwater, Peters decided to bring along a GoPro Hero 2 camera fitted inside a $50 custom-made torpedo. 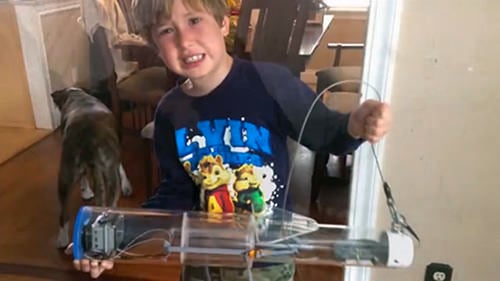 As they hauled up fish after fish, something unexpected happened: a pod of Pacific White-Sided dolphins decided to show up and swim with their boat.

Dropping the torpedo back into the water, Peters managed to snag some of the most beautiful underwater footage you’ll ever see, showing the large group of dolphins swimming playfully behind the camera as it travels through the water.

Check out the video above — the amazingness starts at around 1:40 — and be prepared to pick your jaw off the ground.

After the video started going viral online, GoPro decided to feature it as “Video of the Day” on its Facebook page. Peters has also been asked repeatedly about the details of his custom torpedo design. He’s currently considering selling it or licensing the design.