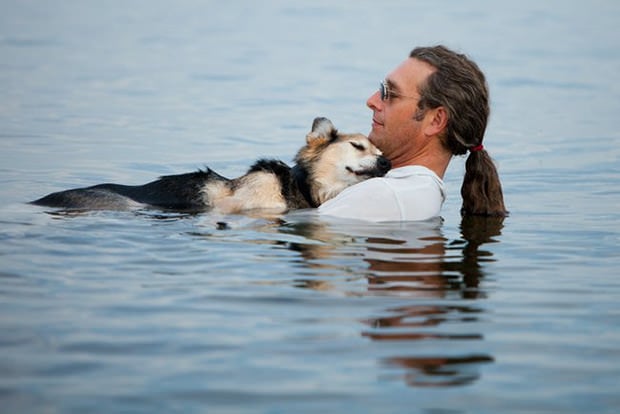 Photographer Hannah Stonehouse Hudson of Stonehouse Photography made a splash on the Internet this past week after sharing a heartwarming dog photograph through Facebook.

The photograph shows Wisconsin resident John Unger in a tender moment with his dog Schoep in Lake Superior.


Unger first rescued Schoep when he was a 8-month-old puppy, and the two have spent the past 19 years together. Unger says that the dog saved him from suicide after he broke up with his former fiancée years ago.

When Schoep started getting up in years, he developed arthritis in his legs.

As the pain started giving the dog sleeping problems, Unger discovered that water helps to soothe the pain. He therefore started taking Schoep into the waters of Lake Superior and allowing him periods of pain-free sleep in his arms.

This photo was from a last minute session. We had been trying to get together for weeks, but it kept not happening because of my travel schedule for Stonehouse. We finally got together last Tuesday (the 31st). I had about 5 minutes to shoot and this is what I caught — a man and his dog. John loving his Schoep, and Schoep trusting John so much he falls asleep in the buoyancy of the water. This is in no way posed – I hate posed photos – they never, ever capture the true essence of anything.

After posting the photograph to Facebook, the image went viral. It has since attracted hundreds of thousands of likes and comments, and is being shared by the media all across the world: 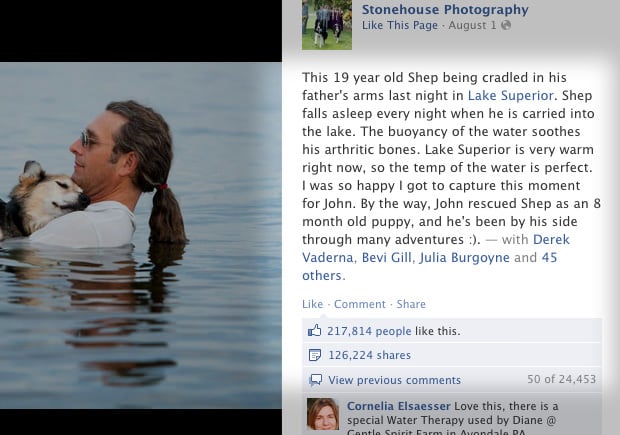 In addition to her wedding photography business, Stonehouse Hudson also photographs pets, often volunteering her time to shoot portraits of animals at local shelters. You can find her on Facebook here.

Update: An anonymous donor has stepped forward to provide Schoep with laser treatment for his arthritis at a local animal hospital. (thx Cyrious!)