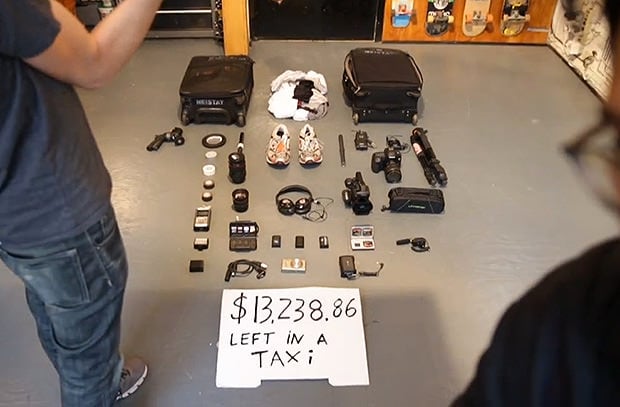 A photographer’s worst nightmare happened to YouTube filmmaker Casey Neistat recently. After taking a taxi after a long 18-hour work day and flight, Neistat accidentally forgot all of his luggage — and $13,238.86 worth of camera gear — in the back of a New York City taxi cab. Among the equipment lost was a Canon 5D Mark III kit ($4300), a 24-70mm lens ($1600), and about $550 worth of memory cards — equipment necessary for Neistat to make a living.


The next day, Neistat got a call from the police department informing him that the taxi driver had turned in the gear. Surprised by the honesty, Neistat went to thank the driver in person and rewarded him with a massive tip.

He also decided to share the story with the world by creating an op-ed video for the New York Times:

Thus, my fortunes rest on the strength of the moral compass of whoever has found my property. Each time a stranger does the right thing, and returns something to its rightful owner, my faith in humanity is restored.

Thanks for sharing, Neistat — our faith in humanity is restored as well!