Pictures do a lot for humanity. They compress 1000 words into one simple photo, capture special moments and freeze them in time, put us back in touch with our history and, more recently, when 36.7-million of them are taken every second by one of the world’s fastest cameras, pictures can also help cure cancer by catching it early. That last part is due to the brilliant minds in a lab at UCLA who have created what they are calling “The World’s Fastest Camera.” 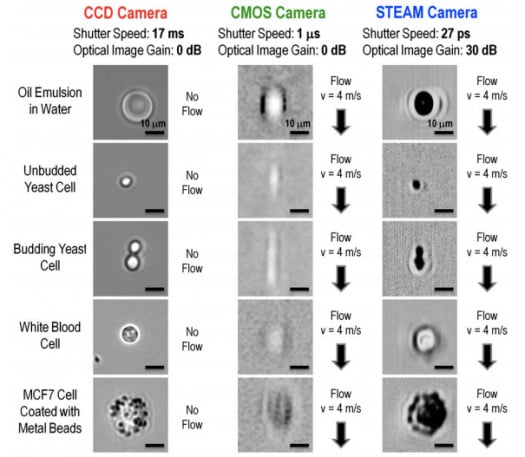 The camera is used to detect cancerous cells moving through the blood amongst millions of healthy ones, and as you would imagine, you need some serious speed to make this happen. Fortunately, when compared to CCD and CMOS cameras, the STEAM camera (short for Serial Time-Encoded Amplified Microscopy) stands head and shoulders above the rest. At a blazing shutter speed of just 27-picoseconds, the camera can snap 36.7-million frames every second, processing 100,000 cells per second as they move at 9mph.

Technically the camera isn’t the world’s fastest, that title belongs to MIT’s light speed camera, which can visualize photons, but since the two are so drastically different it’s hardly a fair comparison. To be sure, you’re not going to be using either of the world’s fastest cameras on the street anytime soon, nor would you need to, but it goes to show that advances in the world of photography aren’t relegated to the newest Canon, Nikon or Leica hitting store shelves. Sometimes, advances in the world of photography help stop cancer.

(via UCLA via PopSci)

Photojournalist Julian Cardona on Documenting the Evolution of Juarez

The Crazy Zoom of a 1700mm Nikon Lens