Unlike most photographers, I hate my camera. I have read hundreds of stories on the Internet in which photographers argue about which cameras are the best and why. There are stories trying to prove that Canon is better than Nikon, or that 4×5 film is better than medium format digital. Camera review websites show scientific-style photographs displaying how much detail they have captured in a dollar bill, or pictures of color checkers and skin tones. They will also show “real-world” and studio tests illustrating how camera A is better than camera B and write long narratives about why. 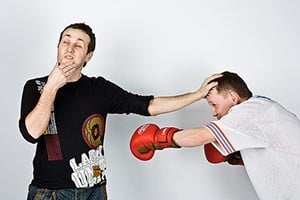 The comments area of the page is where the real battle begins. It’s a battle between the Skeptic, the Cynic, and the Undoubting Believer. The Undoubting Believer loves everything he reads about in the article and drools over the amazing new camera. He will defend to the death that this is absolutely the best new camera out there. Now the Skeptic throws some punches. The Skeptic will pick on a few problems the camera has and will say that under certain circumstances this may be a great camera, but under other conditions it may not be. “This is a great camera for sports, but not for the studio” or something along those lines.

The height of the battle is when the Cynic steps into the ring. No matter what the article states, the Cynic doesn’t believe any of it. One would think that the Cynic has a PhD in online camera reviewing. The Cynic goes on to talk about how bad this camera is in comparison to others, how overpriced it is, and how it’s worse than its predecessor. The funny thing is that this person has never actually used the new camera. Blow after blow the Cynic obsesses over what is wrong about this camera. The Cynic will bash the undoubting believer and the skeptic to no avail. They will alternate turns bashing each other until they get completely off topic and start speaking incoherently. Once the dust settles you realize that the comment battle hasn’t added a single ounce of useful information to the review. It’s a battle in which all the soldiers die and the civilians of the neighboring towns are left watching in bewilderment, wondering what the purpose of the battle was in the first place. The reason why nobody will ever win is because no matter how great a camera may be in the reviews, it will never be perfect. Every camera has advantages and disadvantages in comparison to others and it’s likely that no matter what they are, the camera will not make you a better photographer.

No matter how good reviewers say a camera is, I still hate it. The camera is always the thing trying to get in the way of me making the picture I have envisioned or I am witnessing before me. You are in front of an amazing sunset but the image the camera makes often doesn’t quite lives up to what it was like to be on that beach watching that sunset. Is it possible to make a picture of an amazing sunset that lives up to the moment? I think so, but most of the time the image is just a disappointment.

When I download images from a shoot onto my computer I sometimes realize that the shot I thought I captured, which embodied the most amazing moment from that shoot, is out of focus or something is just slightly not right. More often than not, the camera gets in the way of the feeling I had when when I pushed that shutter button. For the short time period when the shutter was open and the mirror was up, I am in the dark and can’t see with certainty that I captured what I thought I captured until I see the image later. Even if I did capture the moment I was hoping to capture, more often than not the image I shot doesn’t quite convey what I felt when I took that picture.

This is why I love photography but hate my camera. I love the challenge of trying to use a clunky piece of technology to capture images even though the odds are stacked against me. Trying to fit a person, experience, or piece of the world onto the surface of a digital sensor or piece of film is such a challenge. As photographers we are taking the three dimensional world and turning it into a two dimensional photograph. No matter how good a camera may be, or how good the reviews may be, it is still just a tool which allows me to make photographs. Even a camera with the very best reviews can easily make horrible photographs. I’ll tell you one thing for sure, sitting around arguing about why one camera is better than another will not make you a better photographer, but it sure can be entertaining.