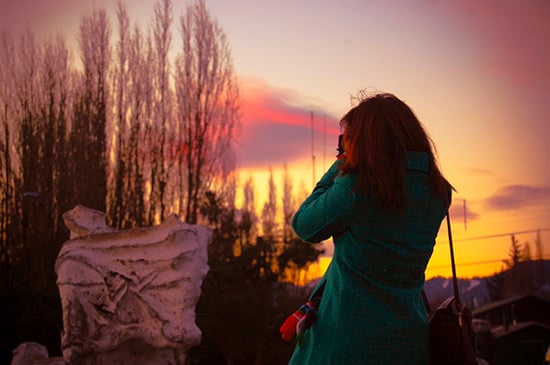 The missing subject. If it’s not obvious at a glance what is the subject of your image – i.e. what the photo is actually about – then you should probably ask yourself why you took the picture in the first place. If the answer was ‘because of the X’, and the X is not obvious, then you need to try again. The subject in a photo should stand out – by contrast, by color, by light, by motion, or by focus. In exceptional cases it’s possible to make it stand out by not having it, but this is very, very rare and requires perfect use of contextual information to allow the viewer to make inferences about what should complete the scene.

Poor perspective use. Pick your perspective before your angle of view. Wide angles are used to emphasize foreground subjects, telephotos to de-emphasize them with respect to the background. Don’t use a wide angle to ‘get more stuff in’ the frame, that will just result in boring images. Similarly, telephotos are not for ‘getting closer’.

Being stuck in the wrong gear. This includes the entire suite of woes of technical errors – exposure, focus, camera shake, white balance etc. Usually due to the driver relying too much on the camera to do the work for you: it will never get it right because there is no way the camera can know what the photographer intends to do with each image. You will have to take control somewhere along the line in the imaging chain in order to create the image you envision in your mind at the time of capture, and it’s better to do it closer to the capture process to minimize the subsequent amount of image quality degradation.

Worrying too much about gear. This usually takes the form of hauling around everything you own for every shoot and believing a new piece of equipment will solve some deficiency in your images that can almost always be traced back to photographic skill, or more specifically, the lack thereof. If you carry too much stuff you’ll always be second-guessing your choice of lens or camera. And if you keep buying new gear, you’ll never master what you’ve got – and be at a disadvantage because you can’t control your equipment. Before buying new gear, make sure you know exactly what it is with your current kit that is the limitation, and that it will resolve the problem – otherwise you’ll have both wasted money and compromised your photography. However, if you’re just a camera collector, disregard this item. In fact, disregard this entire post.

Intrusions and truncations into frame edges. With 100% finders being commonplace, there’s no excuse for parts of the subject being cut off at the edges, or obviously contrasting distractions intruding into the frame – like tree branches or phantom limbs, for instance.

Color issues. Odd white balance, or objects in the frame that are obviously the wrong color can create some interest in an otherwise boring scene – or things like that can just be jarring if they’re too far off the mark. This is especially important for skin tones or food. If you’re not sure what the correct white balance is, either adjust it accordingly with the eyedropper tool when converting the raw file, or manually white balance with a gray card. Don’t leave the camera to do it on automatic – if a channel gets clipped, the information isn’t recoverable. This is especially obvious with jpegs due to the limited tonal range available in the first place.

Black and white contrast issues. Amateur black and white generally tends to be too flat or too contrasty. The latter results in a loss of highlight and shadow quarter tones, resulting in an over-graphic representation of the subject and not enough tonal range to differentiate the subject from the background; the former is just dull and uninteresting to look at. It’s like knowing the chef had twenty different ingredients to make a meal, but he used only the gray, monotonous-tasting one.

Poor use of natural frames or leading lines. These little ‘helpers’ are to be found all over the place – the converging perspectives of a long hallway are a great example of this. They can help to draw your eye to the subject, but they can also lead your eye away from it if you put the subject anywhere else by the confluence of these lines.

Center-only composition. Few images work well with the subject dead-center or nearly there; the more dynamic images always have a bit of space before or after – I like to think of it as the anticipation or the aftermath. All cameras these days have more than one focusing point. I hear they even let you pick which one!

Lack of balance. I did say just now that center-subject compositions are boring; that’s because they mostly are. But at the same time, you can’t have frames where all of the action happens in say the bottom-left corner and the rest of the image is empty. Visual balance is a tough thing to describe, but fortunately it’s one of those properties of an image which is instinctively easy to recognize.

Incorrect use of depth of field. Too little, and the picture becomes about the bokeh – most of the images shot with the old Leica 50/1.0 Noctilux are like this – I can never understand why people gush over a picture of a boring fence or pile of bricks just because it exhibits swirly bokeh; to me it says nothing more than ‘I rely on my gear to create a style for me because I have no imagination!’ It is, of course, a tool – used well, it can enhance an image. Used poorly, well, you’re just another camera collector who takes pictures of fences. Notice I haven’t said anything about too much depth of field – you can always compose to use this to your advantage, because any secondary element of context helps to tell the story. However, the converse is also true – there’s no context in an abstract wall of blur. Conclusion: I’m beginning to think there’s a just right amount of bokeh for every scene – or at least a range; just enough blur to help you focus on the primary subject, not too much to remove all the context.

Poor timing and not being prepared. I see plenty of shots that I call ‘near misses’. This is when the idea is there, the technical execution is well done, but the timing is off – always caused by a moving element that’s out of position. There are two elements to getting this right – practice, and practice. You need to have some ability to anticipate what’s going to happen next; you also need to have an instinctive feel for how much lag your camera has between depressing the button and the picture being taken. And the only way to make this intuitive is by shooting and getting accustomed to it.

Getting stuck in the creative rut. Not pushing yourself and relying on the same patterns of framing time and again may ensure you get the money shot, but eventually everybody else will be getting the same money shot, too. (Certain local celebrity wedding photographers where I live are notorious for this.) You need to be continually trying new things, improving and refining and always pushing. It’s an increasingly competitive industry, and a very visual one – if your images don’t stand out, then you’re never going to be a client’s first choice – they probably won’t even notice you from the rest of the pack.
Leaving the thinking to the client asks for and no more. This is related to the previous point – in fact, it’s the precursor to it. Clients come in a continuum: those who leave all of the creative freedom to the photographer, recognizing that the reason why they were attracted to your portfolio in the first place is because of your own personal style (these are the best clients of all) – to those that tell you exactly what they want, down to the last millimeter of positioning. The former type of client is rare; this makes it very easy to fall into being a contractor/ executor rather than being a creative.

Subcontracting out too much of the retouching and styling. Another related point comes in the form of an army of assistants and stylists. Given how much of the creative process is encapsulated in the post processing portion, it seems rather risky to leave the work to somebody else – even if they understand your original vision, chances are that it will take longer because there will be many revisions required, and in the end it may still not quite be what you initially envisioned. If you let this happen for too long, technology may move on to the point where you don’t even know how to achieve the desired end result anymore. And if your assistant or retoucher leaves, then what happens?

Not trying different subjects. I’ve had endless debates with various people in the industry on this topic – is it better to be a specialist and only shoot one thing, or a generalist and shoot everything? The reality is that it’s a bit of both. You have to be known for one thing – that becomes your go-to commercial support – but you need to be able to shoot many different types of subjects. There are two reasons for this – firstly, it lets you make more income from being able to offer clients additional services; the less obvious one is that shooting different things helps you to develop different techniques that can be applied across your particular subject of expertise.

Finally, there’s working too much. This sounds contradictory, but not taking enough time out to focus on personal shooting/ creative development can actually make you lose your creativity and consequently negatively affect your business. Fortunately when this happens, you’ve got less work and more time to experiment, so hopefully you do actually go out and do some personal shooting. I’ve definitely noticed that the more commercial work I do, the less I feel inclined to do personal work – I think this is dangerous because that’s probably the only time where you don’t have limitations imposed on you by your deliverables, and can let your creativity do its thing.