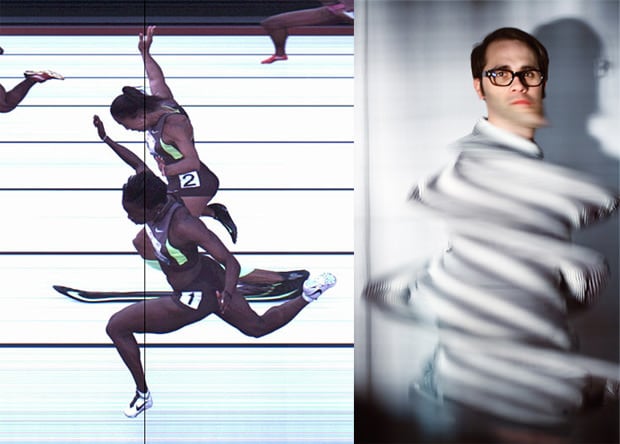 Yesterday we reported on how US Track and Field saw its first “photo finish” tie this past weekend in an Olympic qualifying race. If you thought the finish line photo looked strange, it’s not just you: it’s not an ordinary photo. Journalist Daniel Rutter has written up a great article on how finish line cameras work:

[…] most finish-line cameras aren’t super-high-speed movie cameras, but instead a kind of slit camera. A slit camera has a line-shaped lens, which exposes the film or electronic sensor line by line or column by column, not unlike the way a rolling shutter works. The critical difference, though, is that a slit camera can keep on going past the lens indefinitely. You can keep collecting image data, or keep spooling film past the slit, for as long as you have memory or film. The shutter never closes as long as the film or memory lasts, so it’s impossible to miss any action between the frames.

[…] imagine taking a flatbed scanner sensor and setting it up vertically, looking across a racetrack at the finish line. Start a “scan”, and it’ll authoritatively tell you when every body-part of every runner makes it to the finish, by simply showing that part of that person before any part of anyone else. The speed of the scan should be set to roughly match the speed of the runners, so they look generally the right shape, but any part of any runner that stays stationary relative to the scan rate – a foot on the ground, for instance – will seem long. Any part that’s moving forward relative to the scan rate – a hand or foot coming forward, for instance – will seem short. Even if you mess up the scan rate so everyone looks wide or narrow, whatever part of whatever runner shows up first in the scan is the first to cross the finish line.

Elastic athletes [How to Spot a Psychopath]