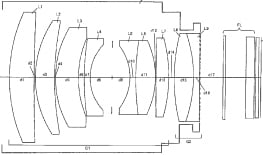 Apertures can get pretty big, but a new patent from Nikon seems to imply that a future Nikon 1 mirrorless lens could weigh in at f/0.7. The patent, which gives an example of a 32mm f/1.2 (pictured above), clearly states that the new technology could successfully yield smaller numbers due to optimization of the aperture diameter, flange back length and image circle.

SLR owners shouldn’t get too excited though, due to the complexity of the innards the smallest practical aperture for an SLR is f/1.2, and even those lenses can get a teensy bit pricey (a 50mm f/1.2 USM from Canon will run you ~$1,500 on Amazon). Mirrorless cameras, on the other hand, can take advantage of smaller f-stops — hence the patent.

P.S. Here’s a fun fact: f/0.7 is actually one of the largest known apertures ever used. It was found in two 50mm NASA-produced Zeiss Lenses that were modified to work on Stanley Kubrik’s movie cameras for candle light only scenes in the movie Barry Lyndon.