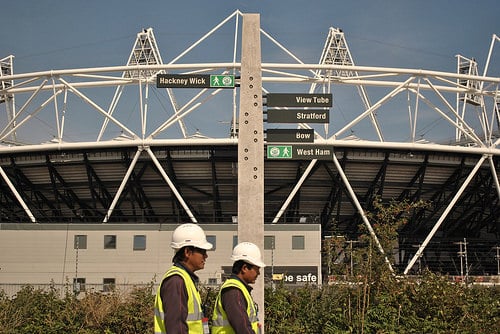 The Olympics are a big deal, and an even bigger opportunity for the country’s photographers. From the moment the next Olympic city is announced, preparations begin and an endless number of photo ops present themselves. That is, if the security guards don’t start harassing you.


Incidentally, that’s exactly what happened the other day in London when security guards from the private security firm G4S ran out onto public land and forcibly prevented a group of photographers and videographers from doing their job. According to The British Journal of Photography, the incident comes just days after the National Union of Journalists were assured by Assistant Commissioner Chris Allison and Commander Bob Broadhurst of Scotland Yard that security would only be working inside the site.

The on-site G4S manager did eventually step in, explaining to the photographers that the security guards had been “trained to deter people from taking photographs,” but failing to explain why they were using that training on public land.

Since the incident, a spokesman for G4S assured BJP that the security guards have been reminded of what they can and cannot do. But perhaps the better question, put to G4S by John Toner of the National Union of Journalists, is why the security guards receive such training in the first place?

(via The British Journal of Photography)