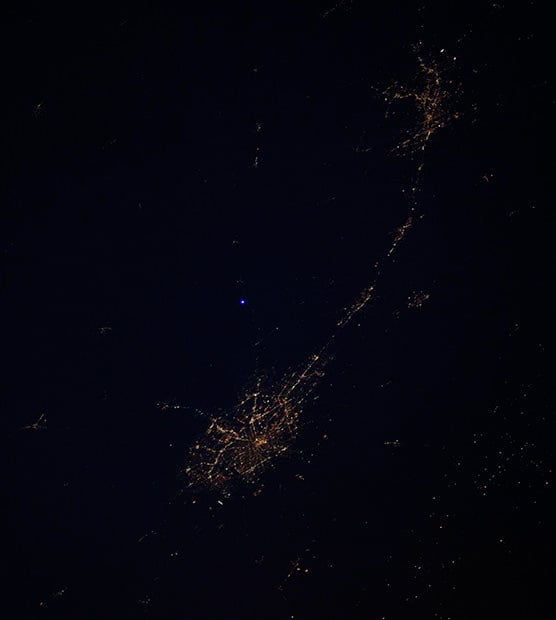 This past Sunday, a group of amateur astronomers in San Antonio, Texas successfully “flashed” the International Space Station with a blue laser and spotlight as it whizzed by overhead. While this might sound like an easy thing to do, it’s much more complicated than you think. Astronaut Don Pettit shot the photo of the experiment seen above, and writes,

This took a number of engineering calculations. Projected beam diameters (assuming the propagation of a Gaussian wave for the laser) and intensity at the target had to be calculated. Tracking space station’s path as it streaked across the sky was another challenge. I used email to communicate with Robert Reeves, one of the association’s members. Considering that it takes a day, maybe more, for a simple exchange of messages (on space station we receive email drops two to three times a day), the whole event took weeks to plan.

The International Space Station maintains an orbital altitude of between 205 and 255 miles, so the fact that Pettit was able to see the flash of light from that distance is quite impressive.

(via Air & Space via Boing Boing)