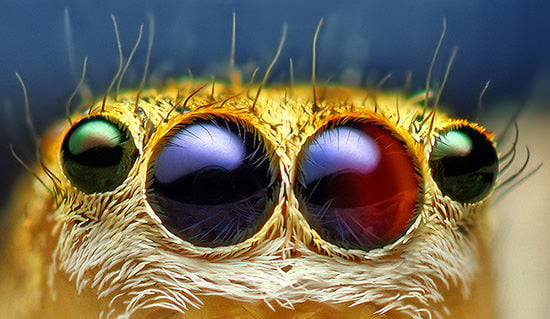 In a paper published in Science this week, Japanese researchers reported on a discovery that jumping spiders use a method for gauging distance called “image defocus”, which no other living organism is known to use. Rather than use focusing and stereoscopic vision like humans or head-wobbling motion parallax like birds, the spiders have two green-detecting layers in their eyes — one in focus and one not. By comparing the two, the spiders can determine the distance from objects. Scientists discovered that bathing spiders in pure red light “breaks” their distance measuring ability.

Regarding the finding’s potential impact on photography, PopPhoto writes,

This “image defocus” could provide an interesting alternative to the way that modern cameras focus and analyze distance. Take for instance the current crop of 3D cameras. Some use two lenses and some allow you to take a panorama of shots, and will pick two to stitch together two to make a 3D final — these methods are analagous to the stereoscopic and motion parallax versions found in biology mentioned above. If cameras were able to adopt the defocus method, it could potentially provide 3D information from a single lens. Alternately, it might be a different way of calculating focus, separate from the phase- and contrast-based versions that we see right now.

No word on when “spider eye rangefinders” will become a standard feature in cameras.

(via Science via PopPhoto)