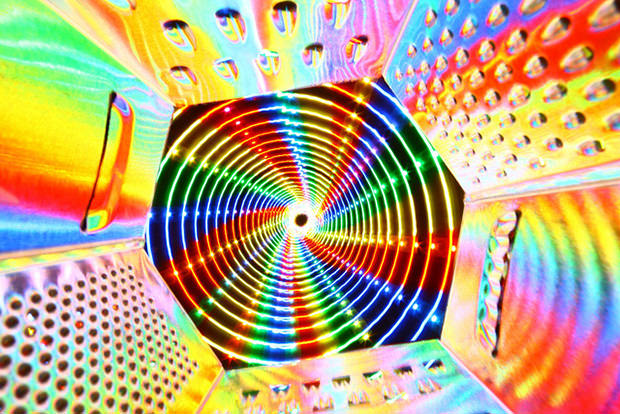 Light painting enthusiast Ian Hobson created this psychedelic long-exposure photo entirely in-camera. Can you figure out how it was created?

The camera was placed on it’s back (i.e. the LCD screen facing down, the lens facing up) on top of a rotating cake stand. Then a cheese grater was placed on top of the lens, so that the camera could see the inside of the grater. and an array of programmable colour changing LEDs taped onto a stick was placed above the camera/cakestand/cheese grater.

The camera was set to bulb mode, so that the shutter would stay open until it was told to close, and a cable release was used to avoid having to keep a finger on the shutter release button, and to avoid shaking the camera needlessly.

The lights in the room were switched off, so that the background of the shot (the ceiling of the room) would be in darkness, and the LEDs were switched on. The shutter was then opened and whilst it was open, the cake stand was rotated slowly, so that the camera sensor recorded the LEDs as trails forming the concentric circles.

Hobson has a great collection of photos created from his light-painting experiments over on his website.