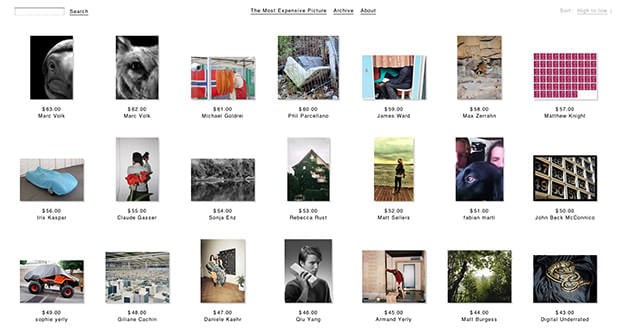 In August 2005, a UK student named Alex Tew launched a creative project called The Million Dollar Homepage. It was a simple webpage containing 1 million pixels that he sold to advertisers for $1 each. The idea quickly went viral, and Tew became a millionaire less than six months after launching it. The Most Expensive Pic­ture is a new photo website that may make its owners rich in a similar way. Anyone can upload a photograph to the website, but for a price: you’ll need to pay $1 more than the person before you. Each photo is featured for at least an hour before new submissions are accepted, and the first 300 submissions will be turned into a book (which all the submitters will receive).

The Most Expensive Picture (via Coudal Partners)

Need Extra Money for the Holidays? Just Become a Photographer!