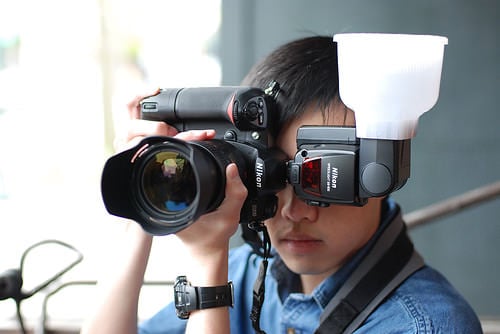 Have an idea for a photo product and an entrepreneurial itch? PDN published an article this past week with three stories of people who successfully turned their ideas into products (and businesses). One of them is the story of Gary Fong and his Lightsphere:

Gary Fong, the former wedding photographer-turned-entrepreneur whose name has become synonymous with lighting accessories, says he got the idea to make his first photographic product, the Lightsphere, while flipping through an in-flight magazine. “There was an ad that said something like, ‘We make plastic parts for your ideas.’” It started him thinking about what he would like to make. What he wanted, he thought, was a large light diffuser, modeled on a lampshade. “Until then, diffusers were tiny. They sat on top of your flash and they didn’t do anything to the shape of the light. All they did was block the light coming through your flash.” He noticed that when he photographed indoors, light filtered through lampshades—which create a hot spot on the ceiling while diffusing the light on faces—produced pretty skin tones. “I thought, okay, I’ll make a big lampshade for electronic flash.”

Fong’s advice to fellow inventors? “All you need is the customers. It’s got to be a product that customers will buy. If they buy some, you know grandma will be packing boxes for you. If they buy waves of them, you’ll have grandma supervising some temps who pack the boxes until you find a distribution company.”

How Inventors Turn Their Ideas Into Photo Products [PDN]

The Basics of Google+: 10 Tips to Help Photographers

How Not to Do a Family Photo Shoot