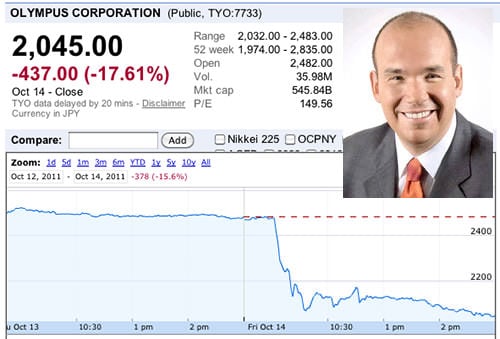 Olympus fired CEO and President Michael Woodford today, causing the company’s stock price to take a 17% dive. The 51-year-old Briton was accused by the board of ignoring the management culture that the firm has had in place for 92 years. Chairman Tsuyoshi Kikukawa (who replaces Woodford) says,

We hoped that he could do things that would be difficult for a Japanese executive to do, but he was not able to understand that we needed to reflect the management style we have built up since the company was established 92 years ago, as well as Japanese culture.

The “difficult things” included ambitious cost-cutting plans, which proved to be successful in the company’s European division. Woodford had a habit of ignoring the management structure of the company by giving direct orders to employees rather than the leadership of the different units. While Olympus is known in the consumer electronics industry for its digital cameras, it’s medical equipment that keeps the company afloat — the Olympus camera division lost 15 billion yen (~$195 million) in the year to March 2011.

How 6 Minutes and a Street Photograph Touched a Life