Update: Olympus has released an official response to the allegations. 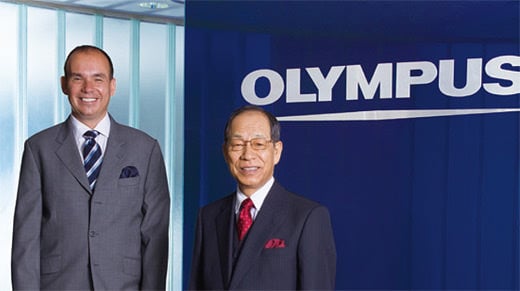 Since Olympus abruptly fired CEO Michael Woodford (pictured, on left) four days ago, the company’s stock price has fallen from roughly ¥2,480 to its current price of ¥1,417, a 43% drop that wiped out nearly $4 billion in value. As we reported yesterday, Woodford is now asking the UK to investigate the company’s financial practices, and is claiming that he was booted when on the verge of exposing fraud.

After being promoted to the role of CEO eight months ago, Woodford became suspicious of payments and acquisitions that the company was making, particularly a purchase made in 2008 of a British medical company named Gyrus.

Woodford says that he confronted chairman Tsuyoshi Kikukawa (picture above, on right) last week with a report he had commissioned by the accounting firm PricewaterhouseCoopers — a report that raised questions over payments made during the Gyrus acquisition. He also demanded Kikukawa’s resignation in light of the findings.

Instead of resigning, Kikukawa allegedly held an emergency board meeting on Friday in which 13 of the Japanese directors voted to fire Woodford (the only non-Japanese director) and replace him with Kikukawa. The firing came just two weeks after Olympus had praised Woodford for his handling of the company.

Kikukawa finally broke his silence today, acknowledging that the payments were made but saying that they were “appropriate”. However, financial analysts still wary of the amounts paid for “advice”, calling them “inconceivable”. The recipient of the payment is also shrouded in mystery. The Financial Times writes,

Of equal concern to Mr Woodford was the identity of the adviser, listed in the documents as Axes Americas, a US-based securities firm, and the related Axam Investments, a Cayman Islands-registered fund overseen by Axes that received the payments from Olympus.

[…] Neither Axes nor Axam were mentioned in public announcements related to the Gyrus deal. According to a review of the acquisition by PwC, Axam was struck from the Cayman Islands registry a few months after taking payment from Olympus, while Axes ceased operations and a man listed as its president effectively disappeared.

Woodford is now saying that he wants to return to the company to “work on behalf of shareholders to help revive” it. This doesn’t appear to be a situation that Olympus can easily resolve in the short run — we may be seeing some drastic changes in the coming days.