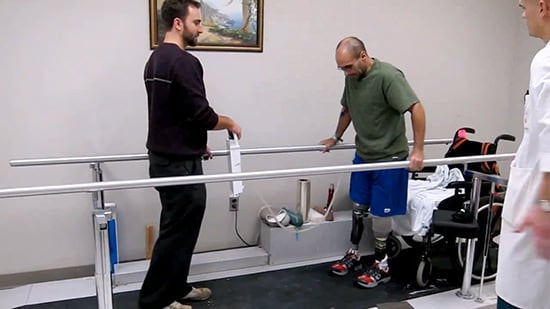 Photojournalist João Silva lost his legs to a land mine in Afghanistan at the end of last year, but — after months of intense rehabilitation — returned to work in July, landing a photo on the front page of the New York Times. On August 2nd, Silva visited the Bronx Documentary Center and gave a talk on his thoughts and experiences.


His words reveal a man deeply passionate about photography, acutely aware of the risks involved, and cognisant of his role in documenting history for future generations:

Immediately [after the explosion], there were medics working on me. I picked up a camera, shot a few frames. The frames weren’t very good, quite frankly, but I was trying to record. I knew it wasn’t good, but I felt alive.

[…] I’ve always seen my role as being a messenger. Documenting history. Trying to bring the reality of war to those who are fortunate enough not to live in a war zone. I’m a historian with a camera, and hopefully my pictures use the medium to capture history, or to tell a story, or to highlight somebody else’s suffering. That’s ultimately why I continue doing it, and why I want to continue doing it.

[…] the images are so stark sometimes that people tend to think that there’s a machine behind the camera, and that’s not the case. We are all human beings. The things that we see go through the eye straight into the brain. Some of those scenes never go away […] At the other side of the camera, there is a human being, and that human being is trying to stay alive, trying to capture, trying to get the message out to the world, and trying to stay safe.

I went down doing what I have a passion for doing. The friends that I’ve lost, and there’s been more than one, they died doing what they had a passion for. […] I fully understood the consequences of what I was doing, and I was always prepared to accept them. And I have. I totally accept them.

I’m going to go back to photography, without a doubt. I’ll continue working for The New York Times. It’s just a matter of time. If I can go back to combat, I will. If I can go back to war zones to cover what I like doing, I most certainly will. There’s no doubt in my mind. Mentally, I’ve always been strong. Like I said, I was pragmatic from the get-go. I got injured, I’ve seen it happen to people around me, so it is O.K. My number came up. Bad numbers come up, so now we move on, you know? I’m hopeful.

You should definitely take some time and read the entire transcript of Silva’s talk over on the NYTimes Lens blog. It’s not every day that you get a glimpse into the mind of a Bang-Bang Club photographer. You can also support Silva’s recovery here.

Joao Silva: ‘This Is What I Do. This Is All That I Know.’ [NYTimes]

Thanks for the tip, Nate!