Alexa’s traffic reports seem to show that photo sharing service 500px is growing like a weed. The site has received quite a bit of coverage as of late.

Compared to Flickr though, the site’s traffic is still pretty insignificant: 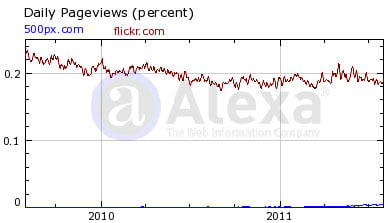 Only time will tell whether they can hold onto the momentum and become a serious rival to Flickr (and now Google’s photo services).

Wear Your 35mm Negatives as a Necklace

Leica Offers to Turn Any M9 into a M9-P