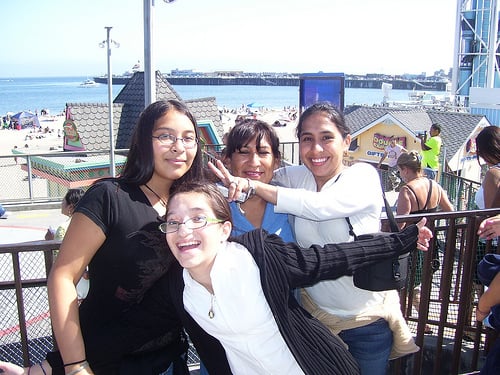 The power of the Internet is amazing. Just yesterday we reported on how a man found a battered memory card that apparently spent four years in the ocean and recovered 104 photos from it. After the story went viral and was widely reported, the owner of the camera has now been found. The girl nearest the camera in the photo above was visiting relatives four years ago when she accidentally dropped the camera into the Pacific Ocean from a wharf Santa Cruz.

Here’s what the camera (or what was left of it) looked like when it was found recently:

On the comments of the photo, she writes:

thanks, peter, for being diligent in tracking down my family!!! we are grateful to you but also to the many people who have contributed – never realized personal information was so easily attainable!!! my sister and cousin are two very giddy teenagers b/c they are now famous!!

Peter Govaars, the guy who found the camera, responds,

You’re welcome! Yes the story sort of took on a life of it’s own. From a local paper to national attention in two days. I was simply hoping that someone who knew someone would contact me by E-Mail, but it quickly turned into a crowd-sourced detective story.

This is yet another example of how powerful the Internet can be when these “mysteries” get crowd-sourced. Earlier this year a roll of film lost in NYC during a blizzard was returned to its owners in Paris with the help of the Internet.

Thanks for the heads up, Tim!

Leica Announces the M9-P: Basically an M9 without the Red Dot