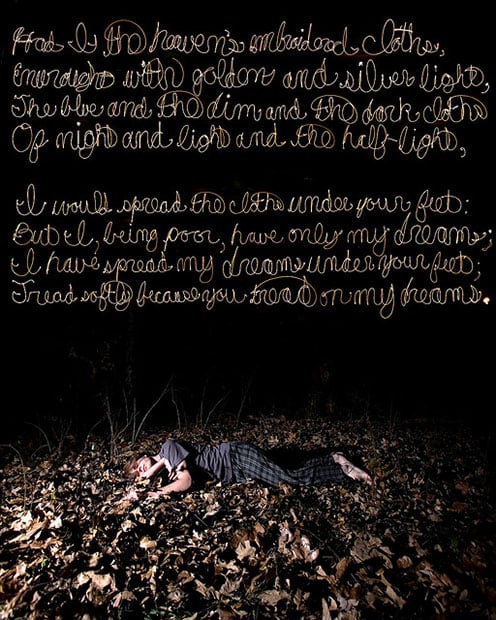 Math major and photo enthusiast Kris Hollingsworth created this beautiful photograph in which he light-painted an entire poem! It took patience and perseverance: practicing the technique took 15 hours, while the actual light painting took another two hours. The image is actually 9 separate photographs in one — eight lines of poetry and the self-portrait of Hollingsworth.

Here’s his detailed explanation of how he went about creating this image:

First I tackled the writing with light. As with any long exposure work, a tripod is an absolute must have. Then I worked on this in a darkroom with the camera set to bulb exposure using a mechanical shutter release to hold it open. I tried several different methods of getting the writing correct, from cutting guides out of cardboard to compositing individual letters to make a light-writing font. In the end though, it just came down to patience and practice. I don’t know if you have ever tried to write out the word “enwrought” legibly and without being able to see where you have already written, but it is definitely an exercise in frustration.

The method that worked best was to mark off the writing area using light stands for visual reference of the frame. The camera was set around f/11 and the lowest ISO. Then, I used a mini-maglight with the bulb uncovered, the breaks between words were created with a piece of black mat board. It took about 15 hours of practice to get consistent, readable hand-writing in the air. It took another couple of hours to write out all the lines, as I did each line of text as one exposure.

Once the light-writing was done, I went outside with two tripods, one with the camera and one with a speedlight. I used a radio trigger to sync and set the camera to the 10-second timer. I used a small paper bag with a hole cut into the bottom to fit over the speedlight as a gobo, which creates the spotlight effect.

Heading into post, I had my nine completed images (the self-portrait plus eight lines of poetry). Using photoshop and layers (the ‘lighten’ blending option is a blessing in this sort of project) I quickly composited the image together. It was a lot of work, but I feel it was well worth it. While I’ve seen some truly amazing images with this technique, I have yet to see any other light writing as detailed and elaborate, but I’m hoping that will change! It’s a wonderful creative process for any photographer to add to his or her arsenal.

Image credit: Yeats by Trianglehead and used with permission