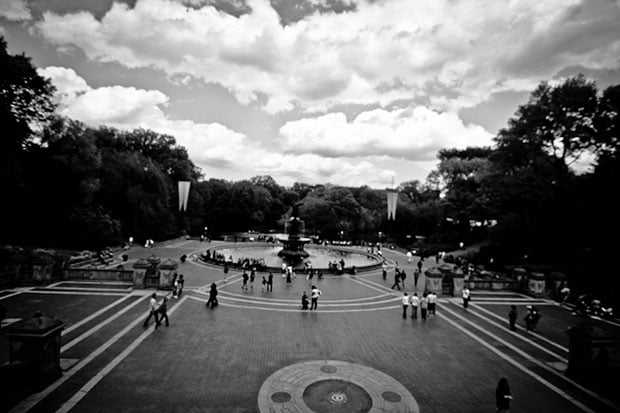 Videographer Michael Justin Porco walked around Central Park in NYC a few days ago snapping photographs, after starting to shoot photos for a time-lapse of Bethesda Fountain, it began drizzling and he only shot ten frames (one every 5 seconds using an intervalometer). When he reviewed the frames, he was amazed to discover that he had accidentally captured a sequence of photographs showing a man proposing to his girlfriend.

And that’s when I saw it. Directly in the middle of the frame, as if I had planned it: a man proposing to his girlfriend. 50 seconds. 10 pictures. A fleeting moment now relive-able.

I don’t know who this couple is or where they’re from. I don’t know if they’re New Yorkers or here on vacation. Finding them will be near impossible. But in this social world of Facebook and Twitter, I’m hoping we can track them down. This is something they should have.

Earlier this year a roll of film lost in NYC was returned to its owners after the story went viral on the Internet… and the owners lived in Paris! Porco is attempting to do the same thing with these photos, so if you know anyone who got engaged in Central Park on Saturday May 7th at around 12:41 pm, contact him!

How to Make Your Own Redscale Film