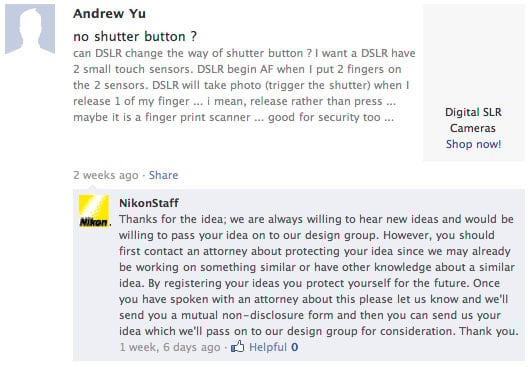 On Nikon’s question and answer Facebook app, a guy named Andrew Yu offered the idea of replacing the shutter button with two touch sensors and received the above response from Nikon. It’s an interesting look at how Nikon, camera manufacturers, and big corporations in general usually respond to ideas and suggestions from the general public.

This is a standard response in many realms. My friends in television have a similar reply to anyone that approaches them with a show idea — they won’t let the person discuss the idea with them as it can become a can of worms if at a later date something with a similar (even vaguely) concept is developed.

Product-wise, big corporations won’t discuss an idea until a patent is filed, to protect both parties. Sadly, filing for a patent is such an expensive and time consuming ordeal, it makes this almost impossible for a casual consumer who has a great idea. [#]

no shutter button? (via Nikon Rumors)

Controversy After Vegan Magazine Found to Use Non-Vegan Stock Photos