Samsung recently partnered up with viral marketing agency The Viral Factory to launch 200 paper airplanes carrying SD cards from the edges of space. We first reported on this experiment back in September of last year, but they followed through with the plans and just published this video this week showing how they accomplished it. The balloon was launched in Germany, and each SD Card carried a message for the finder to prove how durable they are.

Our balloon, filled with 7,815 litres of helium gas, reached 37,339 metres (122,503 feet) before it burst and fell back down to earth. It took about 2.6 hours to rise up to this height and then only 40 minutes to fall back down and land in that very tall tree.

The payload travelled over 300 kilometres from the launch site near Wolfsburg and landed just north of a lovely place called Schonwald, narrowly dodging a lake, a river and a military base.

The planes were released at around 36,500 metres and could have landed anywhere so make sure you watch the skies!

What’s crazy is where the planes are reportedly being found… Apparently people in California, USA and South Africa are finding the planes. 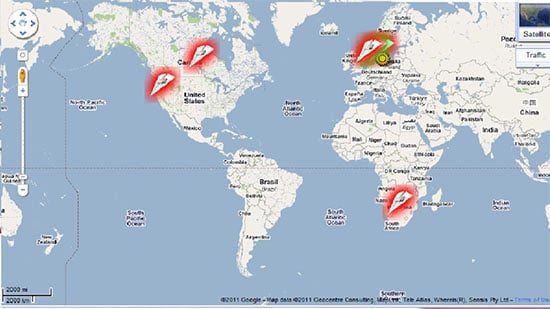 Do you think these planes actually travelled halfway around the world?

Nikon Looking Into Adding a Projector to DSLR Cameras