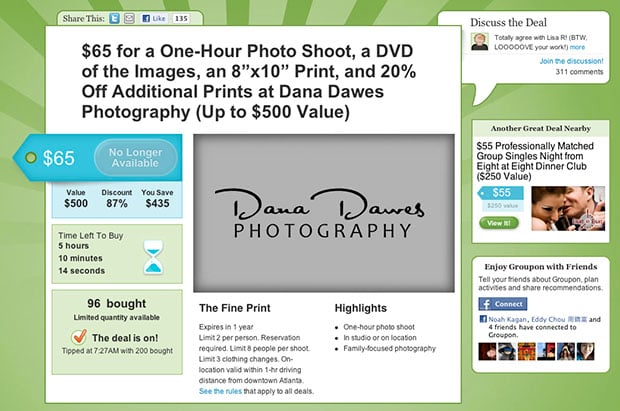 It looked like quite a deal — a photographer with an impressive portfolio of photographs offering a $500 photo package for $65 on the social buying website Groupon. The offer was so enticing that all 1,175 packages quickly sold out, generating over $76,000 in revenue. That’s when people started noticing something fishy about Dana Dawes and her photography.

After hours of chatting with Dana in the discussion section [update: mirror here] of the deal, people started noticing and commenting that images from her portfolio were actually stolen. Here’s a back and forth between Dawes and a commenter named SP:

SP: Groupon, you are dealing with a thief here. This photographer does not own all the photos on her website.

I looked at her website and realized that as a pro myself, her lighting and conversions didn’t match up. I then took one of her images off her website and un-distorted it, and then placed it through a recognition software that brought up this – http://morgaineowensphotography.com/?p=924 — THIS is the owner of the photograph, not Dana Dawes. I would suggest you refund the money to all of these people because this person is using photos that aren’t hers to try to bring in clients. In other words, she’s a fake photographer.

Dana D.: SP.-Let me assure you that I am not a thief. Many of my pictures have been taken in other states as well as many that I took while studying in Europe this past Spring.

SP: Groupon – one major clue that the business is fraudulent is if they offer a deal like this, that cannot be physically fulfilled by a true professional photographer. I’ve seen these deals pop up countless times on groupon, and no one is verifying that these are legitimate businesses that can fulfill their promises. It is physically impossible for a pro photog full time to do 1,000 sessions in a year (and on location at that).

At this point, Dawes begins to remove the galleries and photographs from her website and Facebook page, but not before commenters had already taken screenshots of the pages and reported the fraud to Groupon.

Within hours Groupon refunded the 1,175 people who had ordered the deal and removed the deal from the site.

Due to an error made by my Webmaster in developing and creating my site, Groupon will no longer be offering this promotion… If you would like to keep your appointments, I will be charging $50 for the exact same offer

Needless to say, this generated even more discussion on Groupon. If you have some time, the massive discussion thread [update: mirror here] over there is a pretty interesting read…

If you’re looking to start a photography business, this is probably the opposite of how you want to kick it off.

Update: It looks like Groupon deleted the entire discussion thread. Luckily, we saved a copy.