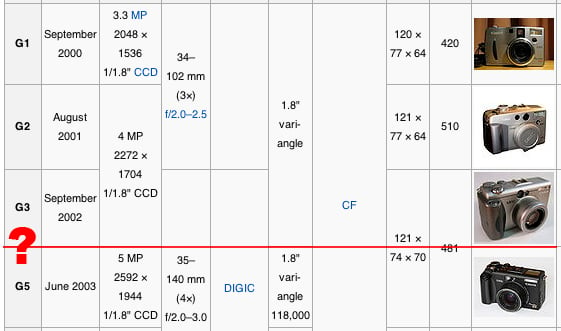 Here’s a bit of camera/culture trivia for this beautiful Friday: Did you know that Japanese culture and many East Asian cultures dislike the number 4? Check out the above screenshot from the Wikipedia page on the Canon PowerShot G line of cameras. Notice how Canon never released a PowerShot G4.

The article even states,

For this reason, we probably won’t ever see a Canon 4D released by Canon. Will Nikon announce a D4 in their flagship line? Don’t know yet. It would be quite interesting if they skipped over it like Canon did with the G4, since everyone is expecting the next camera to be the D4.

The fear of the number 4, called Tetraphobia, is due to the fact that 4, when pronounced, sounds like the word for death in many East Asian languages (Chinese, Japanese, Korean).

When I visited China for a few weeks earlier this summer, I found that most elevators in high-rise buildings I encountered had floor numberings like this: Wacky huh? No one wants to say, “I live on death floor”.

Well, that’s all for this installment of “PetaPixel’s random trivia”. If in fact Nikon jumps to the D5 in their flagship line, you can say you read it first here on PetaPixel! (I don’t think they will though, since they didn’t shy away from the number in other lines).

P.S. The fear of the number 13 (as found in many Western countries) is known as “triskaidekaphobia“.

Update: Another example from the comments: the S3 IS jumps to the S5 IS:

Dude Shoots the Moon with an iPhone 4

Crazy 3D Projection Mapping on a Historic Building in Amsterdam